Prince of Persia -- Is being sought out by

"It is only a matter of time."

Zolrath is an agility-based warrior hero of the Hypogean faction. He can send his future self to battle alongside him. Uniquely, Zolrath's Déjà vu ability can only be used once per battle in certain game modes. It allows him to turn back time to the start of the battle once he and his allies are close to dying.

Zolrath's ultimate ability "Time Rift" allows him to sacrifice his own energy points in order to open time rifts in which he can recover a percentage of his max health.

Most of us think of time as a linear constant, flowing in a single direction and taking us through the course of events that transpire around us. And indeed, for most beings, it is effectively just that. The demon Zolrath, however, doesn't recognize such petty constraints.

Zolrath is able to peer through the mists that separate eras, plucking forgotten secrets from the past and visions of various eventualities from the future. Many of Zolrath's would-be enemies are snuffed out before they have a chance to become a threat. He has seen a thousand versions of what is to come and a hundred heroes rise in his scrying, and he has carefully removed them all from the thread of history. Zolrath's meddling means that throughout Esperia's timeline, countless philosophers, inventors, rulers, and artists were never born.

Though his power to move throughout the continuum is incredible, Zolrath maintains a subtle, meticulous approach to his manipulations. Changing the future into the one he most desires is a lengthy undertaking.

The future for which Zolrath strives is one of pain and desolation. He has seen the visions of a possibility that grows ever more likely under his patient eye. A tortured sky roiling black, the sun but a pale glow that gives no warmth. Ash mixed with snow drifting downward and coming to rest on the cracked ruins of a dozen civilizations. The howls and cackles of demons alternate with the wails of the people unlucky enough to be alive, and presiding over the festivities- Zolrath. The demon has all the time in the world. It's only for everyone else that it's running out.

"Time is against you." 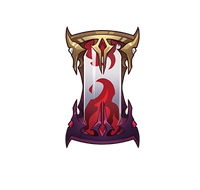 An hourglass that has the ability to change the flow of time, allowing for its holder to go back or forth in time as they please. This hourglass is said to be the embodiment of Zolrath's wretched soul.

Damage dealt to enemies with a lower health percentage than Zolrath is increased by 10%. 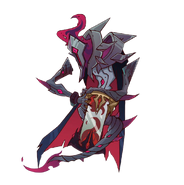