Zikis is an agility-based ranger hero of the Hypogean faction. He possesses powerful, continuous, and explosive abilities that are able to inflict a variety of negative effects on his foes.

He is a Hypogean.

A "run of the mill Hypogean" is not a label that suits Zikis. He loathes clamorous wars and vulgar bloodshed, and is altogether disheartened in scheming.

Humanity and its garbage fill Esperia's dull and lengthy history. Regardless of whose side you're on, it's a massive pain in the neck.

"Life... is enough of a pain." His sole reason for awakening was the hunger that roused him from his slumber.

Chapter 2
The pearl harvesters near Mutt'Heer town are known for their industriousness. Through their very hands, priceless, luminescent Mutt'Heer pearls are retrieved from the ocean floor and become the embellishments of Kuilin City's noble ladies.

Toddle is the laziest fisherman in the nearby fishing village, affectionately known as "Dawdle". He is the kind of person Zikis most appreciates - a scatterbrained, incorrigible sloth.

Disguised as an out-of-towner, Zikis soon became well-acquainted with Toddle. Todd had no time to repair his leaky thatched roof, instead passing much of the time laying in the shadow of the cabin, through the tattered nets, watching other fishermen leave early and return late, or chattering tirelessly with his new friend about the glory of his sea-faring ancestors.

Todd's slovenly, depraved aura was like a sampling of the finest of confections for Zikis. But it wasn't enough. Zikis' pupils narrowed into slits under the midday sun as he licked his lips, ready for a heartier feast.

"The tax collector came by again this morning." As lax as Toddle was, after mid-afternoon, even he was forced to pick himself up and head out to sea to harvest pearls. "The people of this village are so hardworking, this year their taxes have increased by thirty percent."

Gesturing, Toddle said that even as people labored longer and harder, there were still some diligent and capable fishermen who exchanged pearls for better boats and fishing gear. Kooper was on such fellow.

"He's everyone's nightmare!" Kooper is the best fisherman among his peers and the most skilled pearl harvester. Unlike the idle wanderers on the streets of Mutt'Heer, he has ambitions and aspirations. There is a constant flow of such young work-mules thronging like the Autumn schools of fish, in and out all day long, working themselves to the bone so as not to let their families down.

Whilst others surfaced from their harvests and were ready to go home, Kooper was able to continue diving deeper and deeper, his belt pouch always filled with the largest, roundest pearls.

"Before too long, Kooper will be able to make a home for himself in Mutt'Heer." Toddle lay back in the cabin and scowled disdainfully. "Maybe my crummy old man was right. Perhaps hard work really does lead to a cushier life."

"Who knows?" Zikis sneered, watching a group of young men leap into the sea.

Kooper was still descending when a shimmering pearlescent light flickered before his eyes. An enormous and magnificent, never-before-seen oyster! Kooper had never seen an oyster this huge, surely it contained precious treasures! Kooper surged towards it, his strong young body in the mysterious deep sea, reminiscent of a beautiful, tireless barracuda.

Yet no matter how hard he pushed ahead, he could never seem to reach it. As if a mere trick of light... an illusion.

Chapter 3
Zikis hooked the tip of his claw, and with a sudden "poof", the oysters swaying among the coral burst like mere bubbles.

Kooper's pupils eyes widened and his mouth seemed to gasp, and with the dying light of the sun stained the ocean orange, his heart stopped beating. The finest pearl harvester, capable of holding his breath far outlasting his peers, traded his life for an unattainable prize.

It was all nothing more than an illusion concocted by cunning Hypogean magic.

"Hard work is the swiftest shortcut to hell." Toddle couldn't believe his eyes: his companion, lying on the deck stretched out, suddenly shed his human disguise and rose high into the air, his newly unfurled wings casting a huge shadow over the sea below.

Reflected in Zikis' blood-red eyes is the nearby bustling town of Mutt'heer. Mutt'heer, this dream-like place known as the "Pearl of the Desert," its lights just now beginning to glow in the distance.

Provided all goes according to plan, tonight more precious pearls will be auctioned off at newly inflated prices. As the Mutt'heer becomes more splendid, the taxes are bound to become even more exorbitant.

"Toddle, didn't your old man always want you to make a home for yourself in Mutt'heer?" Zikis' pupils shifted as he pondered, playfully glancing across to Toddle, "Perhaps... we can team up, have some fun around here."

Toddle was frozen to the spot, not daring to move under the Hypogean's gaze, why he was chosen he simply could not fathom.

There was a rare hint of excitement in Zikis' voice: "The streets of Mutt'Heer are swarming with slackers and vagrants who have nowhere to return to. Naturally, the most prominent on should be sitting in the sumptuous Town Office."

Zikis had already identified a promising new mayor. What kind of haughty laziness will "Dawdle" cultivate in that stellar position? Zikis was looking forward to finding out.

Despite having indulged in such a delicacy, it was not enough to sate his appetite. He is even hungrier.

For the Hypogeans of Esperia, laziness is just an appetizer, but the struggle behind that laziness, the desperation and pain of internal strife, that is the real meal that fills their bellies.

Where's the next meal?

"Ignorant humans, your work-mule mentality only makes the whip lashings fiercer. Perhaps, you were meant for this lowliness?" 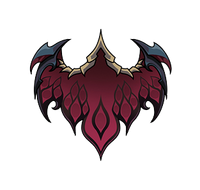 Red, lidless eyes covering Zikis' demonic wings. When the wings are spread out in mid-flight, they can easily turn a person insane. The rapid opening and closing of the red eyes is enough to cause Zikis' hapless victim to lose control of their inhibitions. 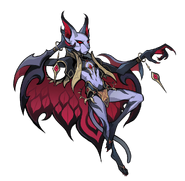