Zaphrael is an intelligence-based mage hero of the Celestial faction. He can teleport around the battlefield to strike enemies with lightning-based attacks which deal damage to them and stun them. Zaphrael can also form a shield around himself to mitigate damage.

His ultimate ability, "Static Charge", transmits lightning between his enemies to deal damage to them.

Zaphrael is formerly the husband of the Hypogean hero, Lucretia.

The evil bewitchment of the Hypogeans led to an unhappy childhood for Zaphrael. With the passing of just one night, his hatred towards evil grew by an unfathomable amount. He swore to banish such evil from the world, even those normal folk who had already succumbed to the evil's bewitchment. But at the same time, his devoutly religious parents, two clerics, taught him the importance of piety and mercy, the two pillars of their faith. After the loss of his parents to the Hypogeans, the need for revenge almost tore him apart. Revenge led him to prowl the monastery where he was staying, in search of lone demons, in a vain attempt to purge an anger that could not be purged.

The First Hypogean War was underway, in order to repay Emperor Ancelot for saving his life, Zaphrael enrolled in the army and later became the first Grand Commander of the Guardians of Dawn. He would wield his unruly emotions and forge them into a great weapon of justice. The emotional Zaphrael was now just a distant memory, he had now become justice itself, and Esperia would no longer be enveloped in the shadow of evil it found itself in. Anything that betrayed this idea would become another statistic of Zaphrael's justice.

On his way to becoming a deity, he graciously accepted the offer from the heavens to join their ranks, unlike Ancelot, who turned down the chance. For Zaphrael, it was only with enhanced strength and a longer life that he would be able to bear the heavy burden of justice and fulfill his mission of faith to its fullest.

Zaphrael spent his childhood years in a monastery beneath the temple. Despite their low rank, his parents were much beloved, deeply pious clerics.

Even as a child, he wasn’t fond of playing games, instead preferring to remain quietly in the company of the statue of a goddess. He would hide away behind it, tucked into the corner, caught up in his own little world.

Hiding away behind that statue, little Zaphrael would often hear the prayers of believers. Back then, he couldn’t understand why grown-ups had so many troubles. Once he had grown up, he began to understand. Much of what people asked for were wishes and desires that they had no other way to fulfil.

To these people, it didn’t matter if you were a deity or a demon - all that mattered was having that wish fulfilled, and whoever fulfilled it would be the one to whom the people bowed and worshipped.

The year that Zaphrael turned 12, the harvests were ruined by a spell of abnormal weather, bringing famine to the region. The aristocratic Lords seized the chance to buy up a great deal of the land with very little rationing. The elderly, women and children, either starved to death or were reduced to seeking refuge elsewhere. The youthful and able-bodied were forced into servitude for their new aristocratic landlords in exchange for minimal rations to support their families.

The peculiar local weather occurring at that time attracted the attention of the Lightbearer temple. Following an investigation, they discovered secret trade between the Lord and the Hypogean - the Lord would provide fresh human flesh for the Hypogean, and the Hypogean would grant the Lord the power to bend others to his will. To destroy the Hypogean, the temple sent out four clerics, including Zaphrael’s parents, and a small unit of hand-picked knights. They all had a wealth of experience in the expulsion of Hypogeans, yet when they arrived at the Lord’s domain, the ruthless and deceitful Hypogean had already begun to turn people’s hearts.

The Lord had already incited the hate of the people, spreading rumors that the famine was an act of a hateful god, and that the temple withheld it’s stores of bread from the hungry. Word of moldy loaves stacked high in warehouses quickly brought the crowd’s blood to the boil. Neither the clerics, nor the soldiers, had anticipated an attack by the very unarmed refugees they were sent to protect. In the end it was too much, the deceived refugees overwhelmed the clerics and soldiers, quickly murdering them and skewering their heads on pitchforks as part of a foul march to the monastery.

That night, the violent mob laid siege to the monastery. The tore down the statue of the goddess and looted the warehouse. They then took every relic they could find, as well as every broken corpse, and slung them all into a heap in the town square, setting the whole gruesome pile ablaze. Zaphrael recognized a few of the refugees as people his mother had given bread to.

That night would haunt Zaphrael forever. The death of his parents, the destruction of his beloved statue, the searing heat of the fire. He would never forget those people incited a bestial rage, no better than animals. More like Hypogeans than the Hypogeans themselves. Young Zaphrael wanted nothing more than to avenge his parents, but a dark hand reached out and tightly held him back. Looking up, eyes full of pity looked back down at him, as if pleading for Zaphrael not to act on impulse. “Zaphrael. I’m certain your mother called you that. She gave me bread...” Ancelot, just 17 years old, implored Zaphrael, “I’m sure she doesn’t want to see you die like that.”

Several hours passed before the clerics of another temple arrived and spirited Zaphrael away to a safe place, just moments before the monastery was razed to the ground.

Orphaned, Zaphrael lived at the other monastery for a number of years. When the First Hypogean War broke out, he joined the army and took up arms against the Hypogeans. Good at drawing strength from the negative emotions of humans, the Hypogeans would exploit the fear and anger of those in battle, getting stronger and stronger, wearing down their human opposition. In those moments, Zaphrael shone like a ray of hope on the battlefield, a devout believer with little regard for his life, held back by nothing. Under his leadership, the human forces won victory after stunning victory! His bravery and strength were commended, his butchery of Hypogeans applauded, and so Zaphrael was promoted to Commander.

So praised was he, that Zaphrael attracted the notice of the gods themselves. They decided that he would replace a god fallen in war, and so he was granted domain over thunder and lightning as a god. The arrogance and insatiability of humanity has created a long established cycle of eternal suffering. For such people, the Divine Light is too gentle - only the sundering of thunder and lightning can adequately punish them.

Drawing upon the endless cycle of war, the Twin Terrors gained strength from humanity. For such a Hypogean to be restored would mean certain disaster for the already fractured world.

Zaphrael received news of a village attempting a sacrificial ceremony to bring about the Hypogean restoration and revive the Twin Terrors. Arriving at the scene, Zaphrael is met by the unexpected sight of his then-mortal wife. Even as the child was being merged with the Hypogean, she pleaded desperately with Zaphrael to save their child - it was their only flesh and blood.

But it was too late. Already, the child’s flesh and blood had been infested by the Hypogean... He was barely even conscious, anymore. Wielding a searing hot lightning bolt, Zaphrael knew what he had to do, but hesitated. The child was struggling helplessly, throwing the bolt would be sure to kill him.

As if sensing his father nearby, the child weakly murmurs, “daddy.” Snapping out of his haze abruptly, the child’s mutterings tinged with slyness, Zaphrael realizes it is just the Hypogean attempting to deceive him. It’s too late for the child, the Hypogean cannot be permitted to return to the human realm! That night long ago at the monastery, Zaphrael learned the truth of human nature. Since then, he had dutifully performed his tasks for decades without bias or partiality. Even if one must sacrifice their own flesh and blood, evil must be punished!

It was his firm belief that only by establishing justice and order in the world, could much of the world be protected.

Thus, gripping the lightning bolt in his hand, he made his final decision. 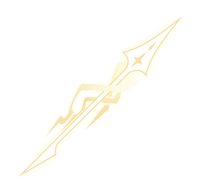 An illustrious spear consisting of heavenly lightning. It's frightening heat and power is able to turn enemies into ashes in an instant. 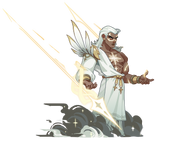 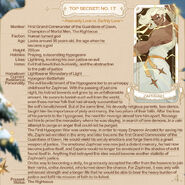 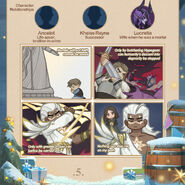 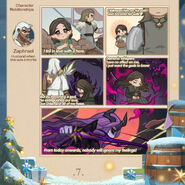 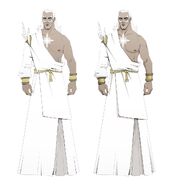 Tales of Esperia- A Memory of Lucretia - AFK Arena