Bastion of the Elements

Tomb of the Ancients

Yggdrasil, also known as the World Tree, is the core of the Dark Forest. It serves as the site of the third chapter of the campaign on The World Map, hosting 36 individual stages. Yggdrasil is available upon completion of Bastion of the Elements.

Completing this chapter unlocks the Bounty Board, Fast Rewards, and Battle Speed x2. In addition, the player will be rewarded with a rare Ogi and 3 Common Scrolls.

The world tree, or Yggdrasil to the denizens of the forest, is located at the heart of Wilder territory. Yggdrasil was said to have been planted by Dura many millennia ago as a place for the forest folk to seek refuge from any who would see them harmed. The root system of the immense tree spreads throughout the entirety of the forest, the meters-wide roots set like massive arteries among the smaller vessels of the normal trees. The edge of the forest is said to be protected by a mystical barrier that stands wherever the roots reach. The forest folk put much faith in Yggdrasil, and have rallied around that faith to hold off any invading evils, even while the kingdom of men crumbles. 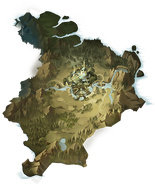 Yggdrasil, as viewed from The World Map.