"I know a talking pig smarter than you!"

Wu Kong is a strength-based warrior hero of the Celestial faction. He is able to attack with his rod to decrease enemy haste points, as well as evade crowd control effects by summoning a singular cloud clone.

His ultimate ability "Cloud Clones" allows him to escape the battlefield, leaving three cloud clones in his place.

The stone cracked as a cold wind blew around it. A brilliant light burst from the fissures as if escaping a prison. Rock crumbled and then softened slightly, revealing a silhouette within the vibrant glow. A monkey sat upright, blinking his luminescent eyes and looking about with a sense of wonder. The little monkey stood upright and took a few quiet steps forward on soft feet that had never before touched the earth. From his perch atop The Mountain of Flowers and Fruit, he surveyed the lands around him.

In an opulent palace leagues away, a guard noticed strange lights coming from a distant peak. He reported the light to his captain, who reported it to a councilor, who reported it to the master of the domain, who was called the Jade Emperor. The emperor was a shrewd man and immediately dispatched riders to find the source of the lights. This marked the first of many meetings between the imperial forces and the strange little monkey with light in his eyes. They couldn’t know on this initial expedition, but the odd creature would become a source of incessant consternation for their master.

The monkey grew, he was given a name. Sun Wu Kong. He befriended many other animals of the mountain and through his deeds became king of the monkeys there. His physical prowess grew day by day, the spells woven into him before his arrival from the stone bolstering his power. When he acquired a weapon of incredible destructive power from a sea dragon there was no force beneath heaven that could best him.

Such power does not go unnoticed. The gods sought to bring the audacious upstart to heel, but even the forces of heaven were found wanting when they dared confront him. During one of their many skirmishes, the monkey king leaped far away. As he could travel thousands of leagues in a single leap, he sometimes landed in unfamiliar territory. This time however was like nothing he had ever seen. This was a land of darkness and war. Evil permeated the very ground. Moments after landing, he was greeted with a flurry of cruelly barbed crossbow bolts. Deflecting them to the last with his magical staff, he detected the sound of many footsteps charging toward his position. They emerged from the smoke and shadow, horned creatures with pale gray skin, wicked swords raised in attack.

Sun Wu Kong laid waste to his assailants, fighting his way through the barren lands and beyond. As on the first day, he invariably left a trail of broken Hypogean bodies behind him, quickly building up a great deal of fame in this strange new land. As before, this didn’t go unnoticed by the higher powers of the realm. The newcomer was invited to join the ranks of the celestials in their fight against the invaders. He accepted, eager to receive the privileges that come with the title of celestial. It remains to be seen, however, if the privileges he expects are in line with what the celestials plan to grant.

“Underestimating me is the last mistake you’ll make” 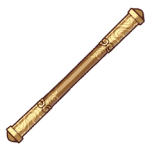 A deceptively heavy and powerful rod that can grow on command. It is said to be capable of injuring and killing almost all beings.

Wu Kong gains a 2-layer protective barrier at the start of battles. If Wu Kong is dealt damage that exceeds 10% of his max health he will lose 1 layer of his protective barriers without suffering any damage at all. 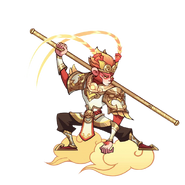