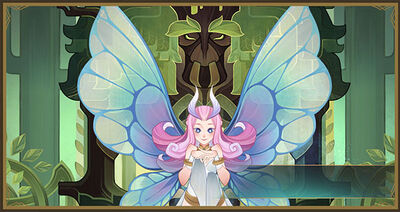 "From the old, new life blooms."

Wisdom and Hope are a union of Wilders heroes consisting of Ulmus and Tasi.

Ulmus is one of the eldest and wisest treants in the forest. He is well-known for his calm demeanor, but for a time there seemed to be something amiss. Something was perturbing him. He began to have a recurring nightmare that lasted for months. In this dream he was unable to move while some sort of defiling evil permeated his surroundings, moving closer and closer to him with each passing night. He could still feel the sting of the putrid thing's scent when awakening. While seeking help and answers, Ulmus discovered that the other treants were suffering the same affliction.

Another night, and drowsiness overcomes Ulmus as he struggles to stay awake. He knows he's fighting a losing battle. He knows the nightmare is waiting to envelop him yet again. This time in his nightmare, the soil is completely spoiled and a wretched black claw floats in front of his eyes, menacing him from the darkness. Ulmus can only flinch as he finds himself locked in place. He watches the claw with a helpless sort of dread as it inches ever closer, when suddenly the scene is disrupted by a flash of blue light. The claw cracks and retracts, shriveling in the wake of the light.

He didn't fall into another nightmare again for many nights. The blue mist would appear in his dreams, soothing him into a restful night. However, as time passed, the blue mist became fleeting, and the evil decay once again rooted itself in his slumber. While once again confronting his nightmare, Ulmus heard an unfamiliar voice. "Someone... please help me." a waning feminine voice could be heard coming out of the blue mist.

"Who goes there? How can I help?" Ulmus responded.

"My name is Tasi, I am the fairy of dreams. A strong evil has reared its ugly head once again. I was able to prevent its pervasion for a short time, but it grows strong. I am not longer able to purge the darkness from dreams. Please, go to the spring of life and call forth the summoning of my spirit."

Ulmus awoke and sprung immediately into action, making his way toward the spring of life, deep within the forest. It was said that Dura created the miraculous spring as a parting gift for the Wilders. Ulmus was meticulous in performing the ritual, and he had brought good offerings. From the corner of his eye he saw a brilliant, luminous flower bud appear beside the spring. From withing its brightness Ulmus was able to discern a beautiful face, it was then that he heard a familiar voice.

The bud burst open and from within it, she stood upright. Tasi stretched, unfolding her beautiful wings. They gently flickered like a butterfly's. "We finally meet in your realm. Thank you for calling forth my spirit. Thank you for gifting me with such a beautiful body." She smiled radiantly, illuminating the surrounding Dark Forest.

Since Tasi's arrival into the physical realm, she stuck by Ulmus' side, fighting for the forest against the encroaching darkness that so doggedly clawed its way into the green lands. The southern woods had already succumbed to the evil, and the war had come to their doorstep.

The first battle went surprisingly well for the defenders, but they had only won the day, not the war. Moreover, the victory they had achieved that day was just a minor setback for the demonic invaders. In the fighting, Ulmus sustained a slight injury. He couldn't have known how serious it actually was. It wasn't until a few days later that Ulmus began to realize the gravity of the situation. The enemy must have used some kind of concoction on their blades. Some unsavoury union of poison and curse. A rot had set in and he became entangled and locked down by the rotting ground. Not even the spring of life seemed able to undo this blight.

"Wake up, Ulmus! Wake up!" Tasi yelled frantically as she sat by his side, fearing that he was already too far gone.

She considered simply putting the old treant out of his misery, but even this small kindness was made impossible by the corruption, The same rot that rooted Ulmus to the ground and weakened his mental state also strengthened his physical resistance. She used the last of her energy that remained after the fighting to enter the dreams of the great elder, Arden, calling for him to help. She then evaporated into a haze of blue mist as she entered the rotting heart of Ulmus, to seek him out in his dream and see what still remained of him.

Tasi found Ulmus' weakened spirit wandering the darkness of his dream. Though frightened, a coherent Ulmus still lived on inside. Tasi had found her friend, but after tapping all of her energy to enter the dream she faced the same problem as he. She would also be trapped in this shell, unable to communicate with the outside world. A prisoner trapped in a rotten cell. Luckily for the two of them, Arden heeded Tasi's dream message. After he had exorcised the blight from Ulmus, The treant searched day and night in search of his beloved Tasi.

Tears streamed down Ulmus' face. He then noticed one of a small blue bud growing on one of his branches. A familiar color. Ulmus felt elated.

It didn't bloom immediately as it had before, in fact it didn't seem to grow much at all. Every day he tended to it, making sure it was well protected from the elements. He waited countless days and nights to see that face again.

"Thank you, Ulmus" she murmured.

They had been united once more.