While performing his multi-striking melee ultimate skill "Bloodlust", damage he receives is greatly reduced and he becomes immune to Crowd control effects.

Historically, the bear folk rested at the top of the food chain in Mauler society. Their size, hardiness, and ferocity ensured a healthy respect from the other peoples and clans. This order crumbled when the chieftain of the bear folk was killed in a confrontation with the centaurs, murdered without warning or reason for nothing more than requesting the customary toll taken for passing through the valleys the bears call home. The few defenders present were routed. Deciding to press their advantage, the centaurs raided a nearby den, taking with them several of the youngest to work as slaves.

The cubs abducted grew up as servants to centaur warriors, beasts of burden, and heavy laborers. Many more were born into this life, and yet another role befell them. In the very arenas that had been constructed with the bears' labor, they were forced to fight for their lives as entertainment. Cubs were ripped away from their mothers as soon as they were able to stand upright and placed in the barracks. Their education consisted solely of technique and tactics. They learned to wield a variety of weapons, and to fight for their survival. The best among them were rewarded with quality equipment and leadership positions in the arena. The others followed orders, recuperated from gruesome injuries, or simply died at the hands of their brethren in the tragic and brutal sport.

Lately a fighter has risen to prominence. When this happens, the fighter will invariably inspire fear in his enemies and respect in his ranks. This fighter, however, is different. This fighter offers more. Warek has become a symbol for all his people in bondage. Born into slavery, he grew up in the barracks. His debut in the arena is what he considers his awakening. Facing another first-timer, a relatively timid bear with a relatively small stature, he did what he had always been trained to do. A few well-placed blows of his halberd put his opponent on the ground, to stare unseeing at the clouds drifting overhead. The blood and the killing itself had no effect on the young fighter. He had seen more death than he could remember during his upbringing and had spilled and lost plenty of blood on his own on the training grounds. What made this different were the cheers. The cheers from the terraced viewing grounds surrounding the arena. All centaur voices, all cheering over the death of one bear at the hands of another.

It would be impossible for Warek to never harm another opponent, but he could try to do as little harm as possible under the circumstances. From that day forward, he began to simply incapacitate his enemies. By crushing bones and severing tendons, he may in fact have been saving the lives of many other fighters, keeping them out of the arena for lengthy recuperation or simply making those with the least combat prowess unable to fight again. At night, in secret, the others began to visit him, to express their gratitude at his mercy and praise his wisdom. These meetings soon became opportunities to scheme. The bears plotted an escape. They plotted a rebellion.

The centaur leadership, however, wasn't so easily fooled. They noticed the changes in the arena and placed eyes and ears everywhere in the barracks. When the details of the plot were revealed to them, they settled on a solution- rather than attempt a brutal suppression that could turn into a costly conflict, they would offer the bears a different way out. Warek and the bears, now officially under his command, would face off against a variety of opponents from around the land. If they emerged victorious under Warek one hundred times, they would be released along with every other bear currently held captive by the centaurs, free to return to their dens in the valleys.

One fight after another, facing a variety of arrogant centaur warriors, strange beasts, and other horrors, the bear folk persevered. Of those who began the gauntlet, only a small core of grizzled fighters remained, but these together with Warek now make up perhaps the most formidable fighting force of all the bear folk. They will not be made to serve again.

"Life without freedom isn't life at all." 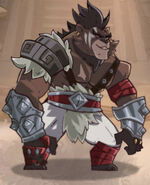 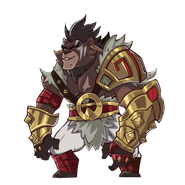