"You're in the wrong saloon, partner."

Walker is a strength-based Warrior hero of the Lightbearer faction. He utilizes a hefty shotgun capable of dealing damage to multiple targets. The more shots Walker hits, the more damage he deals.

Walker had a rough start in a life, being raised by his mother with no knowledge of his father. His mother was often away working hard to make ends meet, so the care of a loving family wasn't freely available to Walker as a child. After his mother passed away from illness, Walker joined the Imperial Garrison. Naturally introverted, few people felt able to talk to him and he grew accustomed to a lonely lifestyle. Drew, however, was one of the scant few who gave Walker the time of day, and offered friendship. Drew was Walker's polar opposite - bubbly and affable, not offended by Walker's cool exterior. He was always by his side, chatting about his plans and life, about every little thing that made him happy day to day. Drew had come with the General from the Imperial Capital, where his dear wife was living. Whenever Drew spoke of his wife, his face lit up, full of love. From here on, Walker would regard Drew as a benchmark of the perfect family, the family Walker himself longed for.

Drew and Walker served together for seven years, during which time they developed an 'until death' friendship. Drew, a little older than Walker, took him under wing as a younger brother. Walker would come to visit Drew's home many times. Thanks to Drew's sweet wife, the home was pristine and loving, and Walker would feel an insurmountable sense of appreciation for this perfect home and family that he has been welcomed into. Drew would need to retire from the military life following an accident. No longer fit to serve, he felt it was the right time to leave. His third child is due and his wife needs his care. As the godfather of Drew's children, Walker was deeply understanding and encouraged this plan.

Once retired, Drew took up employment as a caravan escort. Sadly, he was killed during an assignment by the Quicksand Claws.

Walker was the only attendee at the funeral. Drew's young widow, stood mourning in the rain, clinging to her two children as she faced a hopeless future. Her face was full of despair. In that instant, despite their many differences, the sight of Drew's wife brought back mental images of Walker's own mother, the two blurring together. Walker vowed, without a moment's pause, to avenge Drew. He would make it up to Drew's family. He had to uncover the truth of the situation, to collect intel and give Drew's family an answer. To cover the expense of intel, Walker became a bounty hunter, bringing in all he could, but it was far from enough.

In The Land of the Exiles, there's only two kinds of folks: Those walking on the sand, and those who are buried in it. Walker knows better than anyone that once you step into dunes as a bounty hunter, your life's as lonely and fragile as the tumble weeds rolling through. But before he becomes another lost tumbleweed, he's got some payback to deal out.

Midday, the heat warping and distorting anything in view. Towns, rocks, anthills... the only constant is the flat yellow line of the sands met by the bright blue sky on the horizon. A figure in the distance breaks the clean line as Walker, mounted on horseback, appears in the hazy heat of the sand. Tipping the brim of his hat, he looks up at a circling vulture. "Hungry? Well partner, you'll have to keep up."

"I'm real sorry, but we're all full up." Walker turned to leave when he spied a familiar figure at the inn. A wolfman, and a character he knew to be part of the Quicksand Claws, the very same that attacked the caravan three years ago. The wolfman recognized Walker. He'd heard tell of a crazy fella with a huge shotgun and had laughed it off, but he was not laughing now.

The boss at the inn quickly clocked the grudge these two bore one another, piping up, "I got one rule: the inn is no place for murderin'. It's an unwritten rule, but it's the only one we got. It's a place o' rest, no-one here's dreamin o' bein' fed to the vultures. You dare try killin' someone at my inn, you're gonna get blown away."

"No killin' inside the inn, you say?"

"That's ri- wait, hold up now!" By the time the boss opened his mouth, it was already too late.

The wolfman flew backward, launched through the inn door and out onto the street, cratering as he landed in the sand. He clutched at his jaw in agony, staring dead at the shotgun in Walker's hand, a welt the shape of its butt throbbing on his chin. The wolfman watched Walker as he stepped out of the inn and turned the gun around, the barrel growing larger before his eyes, until he started staring right down it.

The hotel shook with a sudden, violent force. Sand and dust blasted through every crack and gap in the inn. Walker turned to the inn and pushed open the door, sunlight streaming in behind casting a menacing silhouette. He pulled a cigarette from his leather coat and lit it with a still-smoking barrel of his gun.

Walker sat in his room and cleaning his gun. Since his partner died, his gun has been the only thing he trusts. He and his partner has served the Imperial army together, both of them riflemen. Their friendship was the kind that transcended life and death. But three years ago, whilst escorting a caravan through the sands, they were attacked by the Quicksand Claws and his partner was killed. Walker swore to get revenge, but his superiors wouldn't allow it, citing it as against regulation.

To hell with regulation! That same day, Walker brutally beat up his superior and quit on the spot, unceremoniously exiting the army. He knew that if he was going to avenge his friend, he would have to do it his own way.

Walker sets out alone into the Land of the Exiles. In this desolate hellhole, only two things are worth a damn: a gun to remove obstacles, and money to buy information.

He became a bounty hunter. Always choosing the toughest jobs and breaking every rule going, he earned a reputation that scared off others and fostered his image of lone wolf. Using the commissions earned, he bought information on the five men responsible, some of the top members of the "Quicksand Claws", and began hunting them down.

Including today's target, that makes three so far. Only "Lame George" and "Savage Frank" still breathe.

"BANG!" Walker's bullet sailed through the lamp's wick, extinguishing the flame, and found it's mark. A shadow fell outside the window, the groans of a suppressed cry heard in the dark.

Walker blew the smoke from his muzzle of his pistol, reloaded it and returned it to the holster. Unlike the ungainly shotgun, the pistol never left his hand. Outside his window, the Quicksand Claws spy was already long gone. Walker let him live, for now. He was waiting for them to take the bait.

"Come on fellas, I got bullets for everybody."

Midday, the sun beating down from the pinnacle of its arc, almost washing out the presence of the dots on the horizon. A team sent by the Quicksand Claws were waiting for Walker, positioned perfectly to trap him like a net.

Sliding off his mount, Walker stood and faced his enemy. Peering shrewdly from beneath the brim of his hat, he made out the face of one of his targets, Lame George.

The space between the Quicksand Claws members gradually shrank as they closed in, like a rounding bow being pulled back to its limit. They keenly eyed Walker, waiting eagerly for him to try and run. The searing sun was making Lame George sweat. A droplet of salty sweat dripped in his eyes, and in that moment he blinked, the blurry figure of Walker ahead of him moved.

One after another, the clamor of guns firing resounded throughout the sands, the muzzle smoke mingling with disturbed sand and dust, obscuring the scene ahead. The roaring, the flashes of gun fire and screams blend together like wails of an awful beast, brought to an exhausted halt by a cage of dust and smoke.

Walker stepped calmly out of the foggy haze and looked up to the circling vulture from under the newly smoking hole in the brim of his hat. "Grub's up, partner."

Walker hopped back onto his horse and lit a cigarette. Behind him, the vulture and its flock begun digging into the fresh feast. 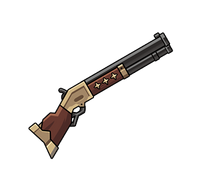 A huge shotgun Walker had made in the Land of the Exiles, it has all the characteristics of a crazed bull. The special bullets filled with a potent gun powder roar as they’re fired, emitting a powerful shockwave and heavy impact reminiscent of a charging bull.

When Walker’s health falls below 60%, his Crit Rating is increased by an additional 15%. 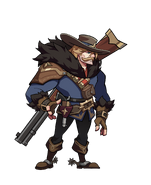 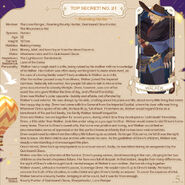 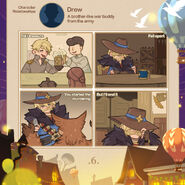