Vurk is an agility-based ranger hero of the Mauler faction who is adept at mobility and group attacks. He has the ability to escape enemy aggro. His attacks pierce through enemies to deal damage to multiple enemies in one attack. Vurk also has the ability to inflict poison to his enemies in a certain area of effect.

In the teeming warrens of the Durri, one must scratch and fight to seize every small opportunity. A life in the warren is one of watchful patience and frantic, scrabbling action. Compassion is in short supply, and comfort is for most an unattainable concept. Even so, it is a rare Durri who would prefer an open sky and the light of day to the relative safety of his fetid subterranean home. The nature of the lives they live has forged a people as resilient as the rodents they so closely resemble. This combined with their ability to rapidly multiply and their inherent cunning makes them more than capable of taking down enemies much larger than themselves.

The Durri way of war differs greatly from that of most Maulers. They typically go toe to toe with the adversary only when absolutely necessary, preferring to watch and wait for the perfect moment to spring an ambush. Darting out with short knives and unleashing crossbow bolts from the shadows before melting back into the darkness. After the poison coating their weapons to do its work, they return to scavenge from the contorted bodies. Although many Maulers view this as cowardly, they have to concede that it is effective.

Vurk shares his people's proclivities for this form of combat, but lacks the caution which usually characterizes them. His willingness to take risks sets him apart, and one feat in particular won him a great deal of renown- Entering the twisting nests of the Arachin to plunder their deadly venoms.

The Arachin nests are generally regarded among the most dangerous places in the world, but the audacious Vurk would settle for no less than the most potent poisons for his arsenal. Even among the sly Durri, Vurk exhibits exceptional stealth and cunning. Very few people, Durri or otherwise, could ever sneak through the mazes of web and clattering patrols of the Arachin, let alone make it back out to tell the tale. Vurk claims to have not only accomplished this incredible enterprise, but to have made it all the way to the heart of the prime nest- the very chamber of the Arachin queen herself. If the toxicity of his bolts are any indicator, he was able to do exactly that.

Though it won him no love among their eight-legged allies, the enormity of the deed itself was enough to elevate the Durri in the eyes of the other Mauler tribes. Once word had spread of the success of this seemingly suicidal undertaking, the cunning Durri were looked upon in a new light.

“You can't defend against what you can't see.”

A crossbow, accurate and light. Perfect for a skulking kill or cunning ambush. 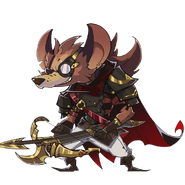