"Nobody can stop me."

Vedan is an agility-based tank hero of the Graveborn faction. He makes use of energy recovery by draining the health of enemies and is also useful with his life-leech buffs to his allies.

Vedan's ultimate ability "Dark Swarm" allows him to turn into a swarm of bats. In this state, he is impervious to attacks and will damage enemies.

The people of Ranhorn were disappearing. When the sun set, those fortunate enough to live behind strong doors would scurry back to their dwellings, drawing bolts and latches. They would shutter their windows and sit together around the warmth of their fires, listening for any strange noises outside. For those without the comforts of hearth and home, the night was dark indeed. The street folk stole worried glances at the moonlight, squeezing into alcoves or behind barrels for the meager obfuscation they could provide. A cloud of mistrust and ill feeling settled over the townspeople, and they turned away any vagrants begging sanctuary with decisive, stern refusals. The street folk and travelers too poor to afford lodging at an inn would be found days later, dropped carelessly in some alley or back lot, their corpses desiccated, their skin like old parchment.

Count Vedan was the last person anyone would ever suspect. A noble of staggering wealth and privilege- What motivation could he possess? He'd never wanted for anything, his life one of such luxury that the average man could hardly imagine it. One thing could not be bought, however. He was very aware that the great equalizer, death, cared no more for his wealth than it did others' poverty. The concept of death one day coming for him was insulting, and he began to delve into the dark arts with an indignant intensity, seeking to escape the inevitable.

With time, efforts, threats, and a great deal of money, he accumulated a small library of forbidden knowledge. His shelf of dusty tomes and bloodstained scrolls contained such damning information that to be found with it would mean a burning at the stake, no matter his station or influence. It was after absorbing this knowledge that he saw the two orphan girls. His intuition told him they would be useful, and he always trusted his intuition.

He took them, Silvina and Isabella, back to his manor. After gaining their trust with smiles, gifts, and warm meals, he brought them to the library. Instructing them to take down the old volumes and read them aloud, his smile took on a maniacal twist. He listened intently as the younger girl muttered over the ancient words as smoothly as if she had read the passage a hundred times before. The room darkened, the candles guttering, and disembodied whispers danced around the trio.

This girl had a gift he could use. Under Vedan's tutelage, Isabella developed the ritual that would allow Vedan to live as long as there were unsuspecting food sources. The blood of the townsfolk would become the life-force of another, superior being.

The older one would serve a more brutal purpose. It wasn't difficult to recognize her strength and callousness. She could accomplish great things with a blade and some training.

The sprawling manor Vedan had occupied began to take on the look of all empty homes, ceasing to exhibit that intangible energy of life within. By the time anyone decided to investigate, the estate had been long abandoned. The only residents now are the thousands of bats that will occasionally swarm into the dusk over Ranhorn, always an omen of another disappearance.

“Death is for the poor.” 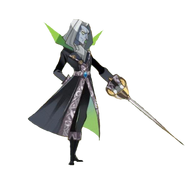