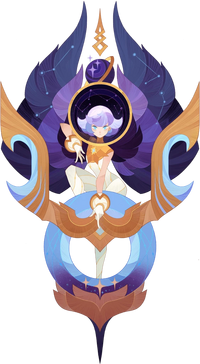 Added the Bountiful Trials event for Audrae - The Chaotic Star, as well as the Arena of Trials event “Guild Trials”, which shall commence 2022/03/30 00:00 UTC.

Added a new skin for Baden - the Abomination called “The Star of Rayne”, which can be obtained during the “Lost Grace” event. This skin will be purchasable from the Wardrobe after the event.

A new “Heroes of Esperia” season will begin on 2022/04/02 00:00 UTC, which will become available to players after completing Stage 11-40 and features the following changes:

We've added a regional Cursed Realm Leaderboard option which will take effect after the results are tallied for the next Cursed Realm event. Specifically:

A new Misty Valley season will commence on 2022/04/04 00:00 UTC. This time the rewards for the Misty Valley Treasure Trove have been updated. Players who have completed Campaign Chapters 36 or 41 can select a T4 Stone.

Reduced the difficulty of certain floors between 1300 and 1350 of the King's Tower, and also added more floors, bringing the total number of floors to 1400.

Players can now climb up to 810 floors within each of the 4-Faction Towers. Simultaneously, the difficulty of some floors between 750 and 780 has also been reduced.

Reduced the difficulty of certain floors between 500 and 520 of the Celestial Sanctum and Infernal Fortress, and also added more floors, bringing the total number of floors to 540 for both towers.

Improved the logic by which resonating gear is shown when swapping hero gear.

The Dragon Store will be reopened once the update goes live. Players that meet the Dragon Crystal Buy-back conditions shall receive a chance for Buy-backs until 2022/04/03 23:59 UTC for their previous Dragon Crystal orders.