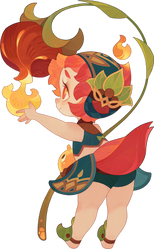 Added the Bountiful Trials event for Astar - The Brilliant Flame, as well as the Arena of Trials event "Guild Trials"

Added the new game mode called “Temporal Rift”. The Temporal Rift season will commence on 2021/12/22 00:00 UTC. Players can access it after completing Stage 19-40. This version of the eventis a test version only, which will run for 30 days. Inh this game mode, all heroes will have a level of 360, and all gear they are wearing will be Mythic T3, including slots which are empty (Gear will not make use of Hero Bonuses.) If a hero already has Mythic T3 gear equipped, the hero's bonus effects will remain. Hero tiers will remain unaffected, and they will not enjoy artifact attribute and effect bonuses.

The Seer of Origins - Fixed an issue that would cause Orthros to move outside of the battlefield on very rare occasions when using his Ultimate ability, “Time Suspension".

Queen of Stars - Optimized the damage targeting mechanic of her ability "Cosmic Motion” so it no longer calculates the damage of enemies who are immune to damage.

Devourer of Flames - Optimized the skill description of his Ultimate ability "Blazing Meteor”. The actual effects of this ability remain the same.