Ulmus is a strength-based tank hero of the Wilders faction. He is a tank hero, up until he uses his ultimate ability "Deep Roots": he then becomes a tough ranged support marksman who is immune to Crowd control effects. He can still soak up damage during his marksman mode, but it leaves the front open, potentially endangering the allied back row. To compensate for this, he has an area of effect health regeneration skill.

Ulmus is old even by Treant standards, and he has resided within the forest for all his life. When the forest was first defiled by the Hypogean invasion, his leaves began to wilt, his tough old bark to rot, his calm mind to blur under the affliction that set into him. His roots grew independently of his control and he had no power to stop them. Nearly all of the creatures that had lived among his branches and roots, providing him with companionship and enjoying his protection, fled. He had become an unwitting danger to them.

Struggling with the blight of body and mind, he knew only frustration and sorrow. His roots sank deep into the earth, anchoring him in place. When he tried to move, his branches would sporadically convulse as if electrified. What had he become? Memories of his long life flowed through his consciousness. The countless seasons, the various creatures he had known and lived aside, the esteem gained through years of service and succor, it was all fading. He had given up. He had stopped resisting.

In the deepest throes of defeat, a warm brightness cut through the darkness that surrounded him. "Hold on, old friend." Arden. The wizened little sage pointed his stand at Ulmus' rotting trunk, illuminating it with a serene yet revitalizing light. The Treant's overgrown roots reacted as if in pain. They began to writhe and whip about violently, tearing furrows in the polluted earth. Flashing toward the intruder, they wrapped Arden in a sinister embrace. Blood darkened his white beard.

Here Ulmus found the strength he had needed. He had lost everything close to him and had given up, but he wouldn't stand by and simply watch someone he respected this much be crushed in his own tangle of roots. Arden, his close friend of centuries, gasped what very well may have been his final words. "Forget about me. Free yourself of this sickness. Persist!" Arden's staff glowed with increasing intensity until nothing could be seen. The light even seemed to block out the sounds of the whipping roots and shaking branches.

When the light dimmed and only the sunbeams filtering through the canopy illuminated the scene, Ulmus was a living symbol of rejuvenation. The overgrown roots had been shed and were already nothing more than dry husks. Withered, dead leaves littered the ground in a thick blanket and were replaced on the Treant's branches with the small, bright green leaves of spring. The deep fissures in his bark had closed up and his trunk and limbs radiated strength. There was only one problem. Arden had disappeared.

After a brief moment of panic, one of the piles of dead leaves began to rustle before parting to reveal a bewildered old face, blinking the light away. Setting his sights on Ulmus, he lit up with a smile, rising as he brushed down his beard. “It's good to have you back.”

Ulmus’ own health recovery effects are increased by 10%. 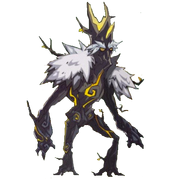