"Those who cannot die, know only sorrow."

Ukyo is an agility-based warrior hero of the Dimensionals faction. His ultimate skill "Hientorajin" allows him leaps at his enemies and unleash swift attacks against them, dealing AoE damage, with the final attack striking his enemies into the air. Ukyo is immune to all damage while using this ability.

He is the first crossover hero with SNK, the second being Nakoruru.

Ukyo Tachibana is a master swordsman and a talented poet, but as with everyone, he possesses a weakness. Ravaged by tuberculosis, the little time he has left is quickly running out.

The incurable disease that has taken hold of Ukyo has stifled his magical way with words. A great poet that no longer speaks, the disease has taken from him his passion for life, and thus Ukyo stays quiet and reserved. He has become accustomed to the sorrow that haunts him. Though Ukyo's life seemed gloomy, there was a single, dazzling ray of light cutting through the shadows. That ray of light was called Kei Odagiri, a woman of noble birth who possessed the charm to stir Ukyo's emotion with but the slightest of smiles. Although Ukyo regarded Kei as his true love, their differences in social status and the inevitability of his early demise made it impossible for them to be together. Nonetheless, Ukyo is determined to show his devotion in some way. Thus, he continues to fight for Kei as her unwavering servant.

Ukyo knew how much Kei adored flowers and set out to find the most beautiful blossom as a gift to her before he succumbed to the disease that festered inside him. He heard tell of a flower which could be found only within the "Demon World”, and decided seek it out.

Relying on his prowess with a blade, he fought his way through masses of enemies to enter the Demon World and eventually found what he was looking for, the " Ultimate Blossom". Although he had located his quarry, his lungs began to fail him and he was unable to leave before the doorway to the Demon World permanently closed, leaving him completely out off from the world he knew.

It seemed as though his final wish would not be fulfilled. The fire inside him was dying out. He would not be able to give the ultimate blossom to his true love. With great regret, Ukyo closed his eyes. Yet his final slumber was seemingly not upon him. With a sharp cough he was reawakened. He did not know so much as the name of his new home, but he was determined to find a way back out. Not knowing if this was the afterlife or just a dream, he resolved to keep a low profile and keep his origins a secret. 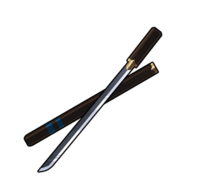 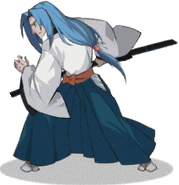