Island of the Banished

Treznor is an agility-based ranger of the Graveborn faction. He deals explosive damage and is able to charge at enemy back lines, causing chaos and disarray.

It was the perfect afternoon for catching a good nap. Overcast skies without a chill to the air, the gentle lapping of waves against the rocks gentle and lulling. Perhaps he’d even have another lovely dream. That would be nice.

Treznor’s horse wasn’t far away, swishing its tail as it paced about. Treznor was pondering as he lay back, hands behind his head, sprawled out comfortably on a patch of high-ground northeast of the Island of the Banished.

But alas, truth is his humanity has long since ceased to be. Sleeping itself would be a fine luxury, let alone having a lovely dream accompany it. So, he closed his eyes and simply let his mind wander, drifting as if on a delicate breeze, taking him back to a time long since passed.

It was a time before radical change overhauled King's Manse, when everything seemed driven by magic, the pace gathering on a path towards destruction. They were once Imperial Guardsmen leading their small units of troops, the only ones who took up arms to fight off the invaders at the walls in the face of indifference from their peers.

But it was now Thoran, having become The Fallen King, who had returned to the city with hordes of undead soldiers in tow. The fanatic populace welcomed the King with open arms, opening the gate and ushering the Graveborn in. Gone was the just and righteous ruler the people fondly remembered, replaced by a tyrant that sacrificed the city, forever forsaking it as the playground of the Graveborn.

The innocent citizens were massacred , then condemned to an eternal unlife. Those that refused to submit their will had their restless spirits imprisoned and horrifically tortured in the Black Prison.

Amidst such chaos and terror, Treznor and his friend Whurral stepped forward. The country they protected no longer existed, but they were still Imperial Guardsmen and their duty had never changed – they would unite those forced into unlife, the unwilling Graveborn.

Desperate to break the curse of eternal unlife, they called themselves the Tainted. However, such a desire could never be realized in this hell hole. It wasn’t long before plans to escape the Black Prison garnered the support of dozens of unwilling Graveborn, all eagerly committing to the execution of the plan. Unfortunately, such a grand plan needed time, and not every willing participant could stand the daily torture at the hands of the Graveborn Warden. As the days passed, the number of accomplices lost to forced supplicancy rose, as they finally submitted themselves to Thoran’s will and signed Quaedam’s contract of damnation. The price of such an exchange was steep – forever under an evil watchful gaze in exchange for considerable power.

Among those was Treznor’s good friend, Whurral, with whom he shared everything. The constant loss of life was just too much for Treznor to bear, and the thought of losing yet another companion was the last straw. He pushed proceedings ahead in a hurry, eager to execute the escape plan post-haste.

Their former unwilling Graveborn comrades were now addled by Quaedam’s influence, the power he had given them over-writing the memories in their hearts as they succumbed, now mere puppets of evil. They clearly recalled the escape plan they had once intended to participate in, deciding that now they would intervene, halting the escape plans and preventing the Tainted from breaking out of the Black Prison.

Even if he had the nerve to charge ahead, Treznor was not a one-man army, he couldn’t handle so many Graveborn, especially when one of those in pursuit was once his dear friend. Even as a huge blade swung towards him, he still felt numb and dazed recalling the very day Whurral was taken away…

Treznor whispered anxiously to Whurral through the cell bars, “If things continue like this, we won’t last much longer. Even your body is…”

“Nothing to worry about. Just sit with me for a while, Treznor.” In so saying, Whurral sat himself down on the cell floor.

It wasn’t as simple as that, Treznor couldn’t allay his concerns, but it wasn’t a situation easily resolved overnight, either. Whurral had long been undead, but the Graveborn warden was adept at torturing the soul’s weakest point. After being betrayed by his former comrades, Whurral took all the blame, even shouldering the responsibility for Treznor, to the point that his tormented soul and spirit were continuously weakened.

“If one day… And I do mean IF…” Whurral’s voice was a little hard to make out, but calm none-the-less, “If I lose myself, like the others did, you know what should be done.”

They’d had this conversation and run through this scenario countless times before, but this time Treznor chose to remain silent.

A surge of pain in Treznor’s arm dragged his conscious back out of his memories as the huge blade sank into his arm. Whurral’s face was no longer one he recognized, replaced by a contorted knot of deranged fury and lunacy. Is eternal life a gift or a curse? Gritting his teeth and raising his spear , Treznor knocked Whurral back, standing himself between Whurral and the other Tainted. For the first time in his existence, he was grateful to be immortal.

In the westernmost reaches of Esperia, south of the Strait of Terror, sits an isolated island. Nestled up on this tiny island is a peculiar band of Graveborn. Unlike their counterparts, these Graveborn regard their eternal unlife a curse, one from which they long to be freed. Immortality is nothing to pursue, instead they yearn for the eternal sleep of death.

Quietly seeking redemption from their unlife, they do not wish to be bothered by the realm of the living, creating frightening illusions to scare away any would be explorers and expedition ships that would dare approach.

Hurried footsteps rushed to Treznor, a flustered voice speaking with alarm, “Treznor! There are strange ships coming in close from the south!”

Suddenly roused from his thoughts back into the present, Treznor opened his eyes to a still-overcast sky.

“Alright, let’s go.” He sat up and stretched, arching his back and raising his arms, just as he used to after naps when he still lived a human life. “Let’s go take a looksee at who’s barged into our island.”

Trotting impatiently from side to side, Treznor’s undead horse gave him an affectionate nuzzle. In the battle that ensued during the prison break, those that weren’t likely to make it sacrificed themselves, merging their souls together. Their sacrifices took shape, their hopes and dreams becoming a form, becoming an unrelenting warhorse that carried the wounded to safety.

As Treznor rose from the ground, a strong wind sweeping back his long mane of hair. Taking up his spear, he mounted his horse and took off towards his destination. With every beat of the horse’s hooves, his friends’ words echoed in his ears…

“You must be on the side of truth, be fair and impartial, and extend mercy to those who are worthy.”

“You must keep your promises and stand by your word, then eventually you will find a way to free yourself of this unlife.”

“If one day my soul is erased and I lose myself, you must swear, you will protect them for me.” 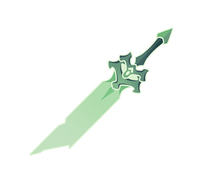 A blade that Treznor has carried into battle many times. Its exterior is laden with hundreds of deeply grooved scars, yet is still possesses a power great enough to shred Treznor's enemies into thousands of unrecognizable pieces.

Each time a shield is generated increases the Attack Ratings of Treznor and the closest 2 heroes by 40% for 6 seconds. This effect cannot be stacked.