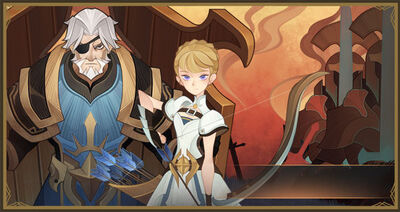 "Your protection is my honor."

The Young & Old are a union of Lightbearer heroes consisting of Gwyneth and Hendrik.

The garrison was in shambles. Fewer than one in ten of the city's would-be-defenders still stood, most having been felled by the devastating bombardment of the Hypogean siege weapons. Everywhere lay broken and burned bodies. Stones lay in piles that once were walls. The soldiers had been well trained and could have held the walls against an attacking force many times their size, but the walls that had been meant to raise them above the danger had instead become their grave. A brutal, makeshift cairn that buried the men it had killed with its collapse.

Reinforcements were on the way to take the demonic forces in field, but they were still days away. What survived of the city was largely defenseless against the besiegers. An advance party split from the main Hypogean force and approached the capital. The defenders who survived knew that they wouldn't be able to hold out long. They braced themselves, huddling in narrow passages and behind mountains of rubble. As the attackers grew nearer, they began dropping. With not even a heartbeat between them, long, heavy-topped arrows began to fall from the sky, one after another. The demons screamed as their armor was punctured and bones broken. Gwyneth had reached the city ahead of the main reinforcements, and not a moment too soon.

The invaders in the main force saw the advance party begin to fall, then scatter, then retreat, and finally die to the last of them. Orders were shouted and demonic soldiers began preparing the cannons for another salvo. If they couldn't take the city, they would destroy every building and tower, and all the people inside it. In normal circumstances, the tactic would have worked. Here, however, the situation was different. The cannons, which should have been well out of range of the defender's arrows, began to take fire. The demons carrying the ammunition screeched and dropped their cargo as they fell and died. More scrambled to take their place, and with their overwhelming numbers eventually managed to get the cannons firing again as the dead piled up around the weapons.

A captain located the source of the arrows and slowly the cannons swiveled toward the young woman who standing atop a crumbled battlement, directing the massacre of the Hypogean cannoneers. Blasts roared as the gigantic weapons bucked backward, launching shrapnel and explosives at the lone defender. She stood defiantly, knowing that even with all her skill and determination, this was the end. She'd give her life for the city, and try to loose a few final arrows before the enemy's shots landed.

A flaming charge arced downward to destroy the girl utterly, but never found its mark. It connected with two massive shields which slammed together to block it like the gates of a fortress. The blast was deafening, but Hendrik stood firm. Gwyneth took a brief moment to process that she still lived, and offered up a quick salute before returning to her earlier work. When the cannoneers continued to die and the demon commanders saw that there was no getting through the shield, they called a massive retreat. They would fall back out of Gwyneth's range and formulate a new strategy.

Hendrik turned to Gwyneth. "It's going to be impossible to hold the capital against a massed attack. The city itself is secondary. The king is what matters. You will escort the king away from the city at nightfall. I will lead the vanguard that will cover you."

"I won't do it! You need me if you're going to make it out of this. Pick a few others to escort the king and let me go with you to take the fight to them."

"That was an order." Hendrik's voice was stern, but tears were beginning to well in his eyes.

He sighed deeply and lowered his head. Putting his hands on his daughter's shoulder. He had spent so long trying to keep her away from harm, and now this.

"It's 'commander' right now, soldier. I gave you an order."

She hesitated, pain playing across her face like a storm cloud. "Then I will carry out the mission, commander." She said through clenched teeth, a tear falling to the dust.

"I'm going to make it out of this. I've been doing it for a long time. Keep the king safe... and keep yourself safe, too, whatever you do."

She nodded, fighting the tears that continued to escape.

Near midnight, the few survivors formed into columns. Gwyneth and a few hand-picked guards sat astride their mounts, surrounding the king, as Hendrik took his place at the head of the infantry formation. He didn't know if she could see the nod her gave her. The only thing on his mind as he called out the orders was the safety of the person dearest to him in the world.