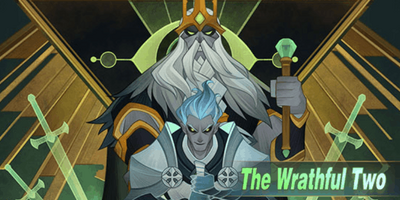 The Wrathful Two are a union of Graveborn heroes consisting of Grezhul and Thoran.

Crows are circling above a graveyard, lured in by some foul prize. Every so often a lone call from one of the birds adds gloom to an already dreary scene. In the middle of the grounds, an arcane symbol rests on the ground like an angry wound. It is drawn in blood and strewn randomly with bits of bone, the source of which is unknown. At the center of the symbol, a body. For the most part it could be any old corpse, but one thing in particular sets this one apart- it wears a crown.

Grezhul stood before the symbol he had drawn. His blank eyes betrayed no sentiment, but his actions were born of admiration and duty. He had been charged with protecting the king, and yet here the king lay. Butchered in his own hall, by his own brother. Aye, the brother had paid though. Grezhul had made it cost the traitors dearly before they overwhelmed him, and now he was walking the earth again as a graveborn. The king though… he was another story. The fact that Grezhul even had to perform this ritual meant that he had failed. Even so, he had to do something.

He said the strange words he’d memorized and thrust his swords into the earth inside the symbol. Its lines began to glow softly, causing flickering shadows to dance on the bones and headstones. The glow started at the outside edges of the symbol and slowly made its way toward the center and the body resting there. Blood crackled and turned black, emitting an acrid stink.

Staring at the corpse in the circle, Grezhul remembered his time with King Thoran. Though the memories had not come through the veils of death and resurrection unscathed, some specifics still held fast, and the overarching emotions associated with the memories had gone unharmed. He wondered absently if the memories would continue to deteriorate, as they do in life. His oath, though… The promise he made to protect the king would never slip away. It was the source of the duty to which he rededicated himself daily.

A memory swam into his mind. He was seven. Still young, but old enough to say the words according to tradition. His father stood before him, wearing almost the same set of armor he wore now, and beamed. He was clearly pleased that his son would follow in his footsteps as a Praetorian. It was the family tradition that while younger sons may pursue any profession, the eldest must always join the Praetorians. He said the words, swearing an oath to the king, but he wouldn’t understand what it all really meant until years later.

Nine years later, he is standing nervously near the back of the throne room. It is the annual Oath Of the Praetorians, a ceremony in which the young men in training are selected for duty and allowed to become full-fledged Praetorians, and boys are brought before the king to say the oath and be taken in for their years-long wardship. The shining, flawless armor he wears doesn’t feel real. As he steps forward to accept his sword, he is in a daze.

Hardly a season after his initiation and he is along for one of the king’s hunts. These are usually relaxed and safe but enemies will occasionally use an opportunity like this to strike. He spots the man crouching in the boughs an instant before the arrow is loosed. Leaping in front of the king, he takes the arrow himself. It is poorly placed and not much more than a scratch, but the poisons coating it are potent. For days he is bedridden, on the brink of death. The palace healers attend him nonstop, and Thoran himself visits daily, urging the young praetorian to fight through it. Eventually, he does.

A rasping sound came from the center of the pentagram, bringing Grezhul out of his reminiscence. The shaking husk of King Thoran slowly stood, finding his balance. His eyes opened and his brows furrowed as a sneer formed on his cracked lips. He radiated spite and hatred. Grezhul placed his hand over the pommel of one of the swords and knelt, bowing his head before his liege. It was time to serve the king.