The Winding Corridors is the 37th campaign chapter available on The World Map, hosting 60 individual stages. It is available upon completion of Dragon's Rest.

"Nobody knows who built these ancient ruins, nor how old they are, all that is known is, they were not built by any current civilization. These ruins exceed the boundaries of what one considers to be ‘normal’.

It is as if this structure exists within a different plane of reality. The hallways and long corridors are all back to front and upside down, as if mangled by some extreme force. Any mortal that enters here would most certainly get lost within its confusing passageways. The lucky few that did escape the structure’s grasp were said to have come out of it physically unscathed, but mentally deranged. So just why would anyone willingly enter such an unusual place? The answer to that question, is of course greed." 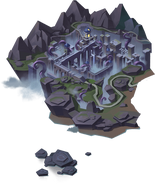 The Winding Corridors, as viewed from The World Map.
Community content is available under CC-BY-SA unless otherwise noted.
Advertisement