The Sunken Lands is the 34th campaign chapter available on The World Map, hosting 60 individual stages. It is available upon completion of The Fallen Stones.

Completing this chapter rewards the player with 2 Faction Choice Cards.

"In the sparse records that still exist, this ancient castle was said to be named Bonapei. In the native tongue of the local inhabitants, it is described as “The Sunken Lands”. The castle itself has a history that spans many millennia and once belonged to a long-extinct civilization. The civilization was one of opulence and a knowledge of the arcane matched only by the gods themselves, yet their power was not enough to save them. A force greater than any mortal machinations emerged from deep within the ocean in a tangle of gargantuan tentacles. The castle was left a watery ruin. In just one night, the denizens of the castle and the surrounding city that shared its name were torn from the tapestry of Esperia's civilizations." 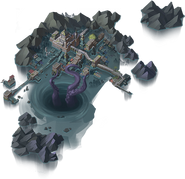 The Sunken Lands, as viewed from The World Map.