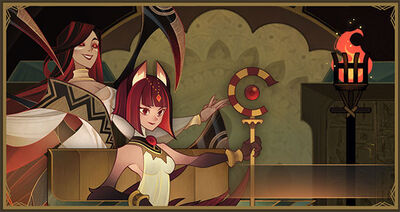 "Power belongs only to the worthy."

The Sisterhood is a union of Mauler heroes consisting of Ankhira and Safiya.

She had never imagined this could come to pass. Driven from her newly acquired throne, the young queen Safiya fled the lands of the Sphinx with the few followers who had been able to escape with her. Night after night she journeyed, hiding away for a few fretful hours of sleep during the day.

She used her obfuscation magic to cover her tracks, but she had to get far enough away that none of her own people would ever happen to chance upon her. Simply being seen by the wrong set of eyes could mean her death.

Eventually the land became dotted with the months of caverns. It seemed like the dark openings yawned in every ravine and hillside, and occasional strands of wispy web drifted in the breeze. This had to be the land of the Arachin.

Unwilling to go into the infamous tunnels herself, she assigned a different entrance to each of her score of devotees. With a wave of her most powerful spell of suggestion, the wary Sphinx were finally willing to enter the feared tunnels of the Arachin and seek out their equally feared leader, Ankhira, the young Matriarch.

One by one, her followers returned. Each was escorted by at least a few of the fearsome spider people, some coming with large, excitably curious groups. They surrounded the deposed queen, wanting to get a look. It was obvious to everyone from her bearing and presence that she was indeed royalty, and the Arachin maintained a respectful distance.

A murmur rose through the crowd at the approach of the last of Safiya's followers. Behind him marched a contingent of unusually large Arachin soldiers, two bearing flags with strange symbols. In the center of the formation was Ankhira, an imposing figure herself.

Once again, Safiya felt worried and unsure. If these people were anything like in the rumors, she could end up paying for this summit with her life.

"I was told that the queen of the Sphinx was here to see me, but doesn't a queen usually travel a little more comfortably than this?" Safiya bristled at the insult, but maintained her composure. If she was going to turn this situation around she would have to stay calm.

"Queens in exile can't afford the same luxuries as those who still maintain their rightful place." She said through a tight smile. "But we can repay your hospitality tenfold, if the Arachin kind enough to grant us refuge." The venomous matriarch responded to the claim with a bemused look.

"How do you propose to repay us? My people have only ever sought one kind of payment." An odd, clicking kind of laughter rose from a few of the assembled spider folk. "We have no need for the things you others use. Our bodies are weapons. We do not farm. We are not merchants. We simply... hunger."

A murmur of approval in the crowd had the hair of every Sphinx present standing on end. "Then let's sate that hunger. Better yet, let's see that your people have more food than you've ever seen."

"What are you proposing? You've already told us that you've been deposed. You want to send us a few scrawny prisoners each year in exchange for help in regaining the throne you lost? We'd be better off just webbing up the lot of you now. It seems a tremendous luxury to feast on another queen. Even one in exile."

Safiya could read between the lines. She knew this was going well because she was still alive. If the matriarch was as uninterested in her proposal as she seemed, the cat folk would already be spider food. She knew that this young ruler couldn't seem weak in front of her followers.

Much like the Sphinx, the Arachin weren't typical Maulers, but the one constant held- The strong ruled. The weak followed. "We can do better than that. The usurpers will only be the first course in a decades long feast, if you can help me."

"Explain, and speak directly. My people dislike following the winding words of your kind, We speak simply here rather than hinting at shadows."

"Your people dislike anything they can't eat" thought Safiya, bowing her head slightly and pressing on. "When the usurpers are brought to justice, we will capture as many as alive as possible. These will be sent to you. I can see no better end for these treacherous rats. And speaking of rats in the more literal sense... there are some rumors that the Arachin have had a bit of a rat problem themselves. Something about some stolen venoms?"

The assembled crowd chittered and hissed their disapproval. "What do you know about that?"

"Very little happens that we don't know about. We Sphinx are a curious and observant people, and we listen closely to everything that transpires around us."

"Yes. It's true. One of the Durri snuck into my own chambers and left with something that belongs to me. We wish to find him, but we seldom range far from our nests."

"Perhaps with some dedicated allies in the wider world, you wouldn't need to leave your nests to project your power. You are a strong people and a force to be reckoned with, but you're hardly involved at all in the greater power structure. We Sphinx serve as advisors and spymasters for half or more of the Mauler tribes already, and many of those are still loyal to me. Allow us to serve you the same way and you'll see your territories and numbers grow. Help me retake my throne and the Arachin will privy to every piece of information that passes through my court. We would be happy to deliver the thief and the stolen items to your doorstep, and who better to catch a rat than a cat?"

Ankhira smiled, satisfied at last with the smug little feline. "Do you hear that, my children? Go clear away the webs from some of the larger chambers. Our guests will need somewhere to stay."