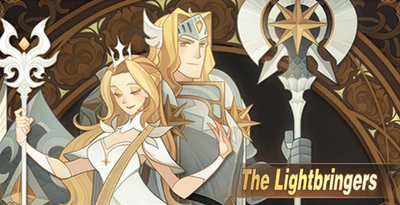 The Lightbringers are a union of Lightbearer heroes consisting of Belinda and Lucius.

A sharp grinding sound echoed from the doorway to the sprawling manor. As the immense door was slowly pushed open, the stench of blood wafted out. Belinda and Lucius frowned and then nodded at one another as a reminder to remain vigilant. Only a few days prior, they were asked to visit the manor by the elders of the Temple of Light to investigate. The owner of the manor is the Earl of Oye, who ten years ago retired to a peaceful life here after fulfilling his mission. Not long ago, he received a secret report, claiming that an evil presence lurked within these walls.

As Belinda and Lucius searched the inner realms of the manor, the smell of blood became more unbearable. Suddenly they saw bloodstains covering the walls in peculiar patterns. The floor was littered with moldy scrolls written in the language of demons. The entire kingdom had been in a state of panic ever since evil had returned to the world. That is, all apart from cult groups and secret societies, who were spreading messages about doomsday, calling on everyone to give up their religions and sacrifice their souls to demons.

Common people can easily become ignorant, foolish or even insane when their hearts are full of fear or they are led astray by temptation. This makes the need for guidance from devotees of The Light, like Belinda and Lucius, even more pressing.

Their calling is clear: To be like shepherds who lead lost lambs back into the light. They embody what is just and right and hold the scales of good and evil in their hands, leading to either punishment or salvation. They will judge those who commit evil and do wrong in the name of The Order of The Light. As devotees, they must deliver impartial judgment.

Belinda and Lucius heard desperate screams coming from the cellar. They followed the screams down the stairs, lighting candles to find their way. In the dim light they made out an old man hobbled over in the center of the room wearing an evil smile all over his face. He was constantly muttering profanities to himself. Belinda and Lucius quickly discerned that the elderly man was in fact the Earl of Oye.

The elderly man stood over a young girl as she lay helpless on a sacrificial altar. Her throat had been cut open and fresh blood was oozing out.

The candlelight was flickering erratically, and the shadow cast on the wall was not that of the elderly man, but of a demon with large horns and wings extending high above his back. Belinda and Lucius were well aware that the Earl of Oye was demon possessed.

They decided to observe what was going on before taking any action. They noticed a large steel cage in the cellar with boys and girls locked inside cowering. Judging from their clothing, they were most likely the Earl’s children. Some were sobbing while others looked fatigued like lambs waiting to be slaughtered. It was obvious that the Earl was willing to sacrifice his own children to ingratiate the demon and the girl he killed on the altar was most likely one of them.

“Earl of Oye, you are guilty of devil worship and blasphemy. In the name of the Temple of Light, I command that you stop resisting.”

Though Lucius wanted to tear this scoundrel to pieces, he reminded himself that he must not act in anger. As a devotee of The Light, he must uphold righteousness and not act in spite.

The Earl was still muttering as if he was insane.

“They have arrived and nothing will stand in their way. All must bow down at their feet.”

“Nothing can save them now! Their souls have been taken over by demons.”

Belinda gasped as she placed her staff in front of her.

“We must eliminate him before he does something even worse.”

She closed her eyes and recited a majestic prayer and her staff became covered in light. As the gentle light shone over the Earl, he suddenly started to glow as he wailed in the voice of a demon. His body transformed into the likeness of his shadow. Sharp horns appeared and wings rose above his figure. His skin turned deep red and the demon who had taken over his soul revealed itself.

Belinda’s staff shined brighter, illuminating every shadow within the hidden corners of the cellar. The children trapped inside the cage were no longer afraid as the divine light shined over them.

The demon was disgusted to see his worst enemy, The Light. He wasn’t going to sit there and do nothing. He worked up all his might and leapt at Belinda. He failed to swipe at her as he was blocked by a shield which stood between them.

The demon bounced right off the shield. Most of the force of the impact was absorbed by the shield as Lucius groaned in agony and refused to concede. He had to protect Belinda and fight against time so that Belinda could expel the demon.

The demon let out a screech. He swiped his claw at Lucius in an attempt to tear him to shreds. But Lucius, with strong conviction, also stood strong in his defense so the demon had no way of getting his claws on Belinda.

“The Divine Light”, Belinda called out as she opened her eyes wide. Rays of divine light showered over the demon’s despicable frame and he began to burn.

“Wretched humans! Everything you do is worthless! You’re nothing more than greedy, selfish cowards! Even if you kill me, there will be many more humans like this ugly, rotting old man who will offer up their souls to us.”

As the demon burned in agony, he continued to ridicule.

Belinda and Lucius watched in silence as the demon was reduced to ashes. The Light could defeat the demon, but they were well aware that the shortcomings of humans would remain and that more would surrender themselves to demons. Belinda and Lucius held firmly to their belief that The Light, as long as it remained, would guide them towards the beautiful side of humanity.