Deep in the dominion of snow, the Frozen Overseer awaits.

The Hunting Fields is a temporary event located in the Dark Forest that is similar in nature to the Abyssal Expedition event. It is unlocked after beating Campaign Stage 19-40.

Players can progress through the fields to conquer the lands, acquire noble titles, and obtain various rewards; either solo (to be paired up with random squad members) or with a team of 4 other selected friends/guildmates. There is also an option for players to join a team as a spectator where they are not required to do anything, but only earn 80% of the rewards as a result. Each team can have up to 10 spectators.

There are a variety of mini-bosses to fight which will grant the player with loot, hero runes, and hunters marks. All of the aforementioned will aid the hero in their progression, ultimately accumulating in a final fight against the main boss of the season.

This is a history lesson of the darkest variety, and has been selectively forgotten; a bloody farce that should not be looked back on.

Heroes answered the call of the gods, and formed a hunting squad to go deep into the hunting grounds, where prehistoric behemoths lurk in every crevasse and the search for the truth begins anew.

Prey trapped on the hunting grounds have become frenzied and rabid, voluntarily turning into minions of the beasts that used to hunt them. Now they are the hunters, and our Heroes are the prey.

Adrax, the god of the hunt, is both the guardian of hunters and the guardian of prey. In his care, the boundary between hunter and prey has been blurred, and chaos grips the land again as a new crazed campaign sets the stage.

Will you adhere to the old teachings, defeat the minions, hunt the beasts, and destroy the origins? Or do you give in to your desires and indulge in this carnival of blood?

In the dead of winter, snowstorms blanket the continent, changing the landscape, blurring roads. It's becoming increasingly difficult to see if we're on the right track.

People have been vanishing all over the place. According to eyewitnesses, missing people were making a long voyage across the continent, only for several of them to disappear. When the snow cleared, they were gone without a trace. The footprints continued for a short distance before being completely covered up by thick snow.

The ever-increasing number of missing people slowly started to gain the attention of the powers that be. They later realized that there was something unusual occurring to the wind, some strange force had taken control of it, a force that had seemingly originated from the sealed-off Hunting Fields.

The gods have summoned the warriors of Esperia to once again enter the Hunting Fields to do battle with the God of Hunting.

This time, however, there is a strange twist to the plot, as the hunting parties are met with a far more insidious hunting field. Cold and hunger gradually chip away at the will of the warriors. This time the snow slows their pace of progress, and in front of them, their prey that had been laying dormant for so long is already baring its fangs...

You need not fight alone in this frigid hell.

Enroll in the Hunt

Players can choose lone wolf to embark on the hunt with 4 randomly selected squad mates, or players can choose team up to join with 4 friends and/or guildmates to form a group of 5. Each squad consists of one captain and 4 squad mates and each member will represent a different faction.

Select your faction wisely, as you cannot change it later. Your choice will play a big role in the hunt. All five factions will share responsibility. Each member of the team, whether choosing the lone wolf or team up option, will choose a different faction to represent (either Lightbearer, Wilder, Graveborn, Mauler, or a combination of Celestial, Hypogean, and Dimensional.) Only heroes from the faction the player chose during the matching process can be used once the challenge has commenced, with the player being allowed to use 10 of their own heroes that match their selected faction.

Welcome to the hunter's paradise! Claim important strategic areas, repel numerous deadly enemies to earn loot, and set up Hunting Camps to aid in your progression. Occupied camps produce Hunter's Marks for players to collect, which will be used to clear certain objectives and combine runes.

Each item of gear attained represents your unforgettable efforts in battle. Your hero hunting level is proof of your conquests, and loot can be equipped to your hero's to boost their attributes while will prime them for the next battle.

Exchange items with your comrades, share resources and overcome the ultimate threat together. Players can access loot that their squad mates have shared via the bag feature.

Venture forth into another realm, vanquish the beasts that await you.

The god of hunting, Adrax, is but a poor creature, mentally twisted by his own duty. With the aid of his disciples, Adrax has returned, angrier and more deranged than ever. Break the altars in order to defeat him in his normal and enraged forms.

An ominous figure emerges at the hunting field's center. The prey transforms itself into an enormous beastly sight, bringing the wind and snow with it. Seize the alter to gain its power, defeat Oleus, and restore peace to the hunting fields.

Squad members can acquire Honor Points in The Hunting Fields to increase their Hunting Squad Level.

To view the ranks and their rewards, select "expand".

Raise your Hunting Squad Level and complete the assigned solo task to claim these rewards.

Once a squad's Hunting Squad Level is increased, supporters can claim the corresponding rewards

Players can access a minimap in order to view any tiles they have specifically marked, or to view their own camps, their allies camps, the entrance to the next section of the map, locked regions, and the location of the bosses. Tapping anywhere on the minimap will bring the player to the location to scope it out before battling their way there.

The map is split into 3 sections: Beginner Wild, Intermediate Wild, and Advanced Wild.

A cell featured bones, located in the Advanced Wild 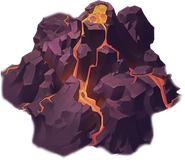 A large volcano cell, located in the Advanced Wild

A smaller volcano cell, located in the Advanced Wild

A pool of lava cell, located in the Advanced Wild 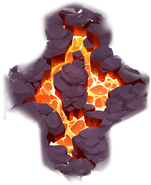 A lava fissure cell, located in the Advanced Wild 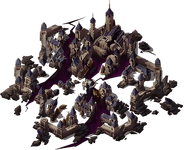 A ruined city cell, located in the Advanced Wild 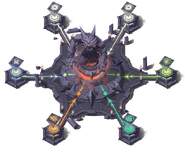 Players can acquire loot that enhances the attribute of their heroes, subsequently aiding in progression through the fields. Loot can be broken down into 3 specifications: Challenge Seals, Runes, and Gear (which can be rare, elite, legendary, or mythic). Squad mates can share loot amongst themselves by placing it into the squad's loot bag.

Additionally, a form of currency called 'Hunter Marks' can be exchanged for runes and for loot gear that is legendary or lower. Hunter marks can be acquired through completion of Hunting Challenges, via AFK rewards, through Gate Bosses, and by occupying camps.

The roar of ancient beasts break through the barriers of reality and have awakened wild behemoths that have long remained dormant.

These powerful entities have entered the hunting grounds of the gods through cracks in time and space, and have become the minions of the beasts, helping them break their chains of imprisonment.

Hunters, pass through the rift before disaster strikes, and fight against these powerful enemies!

To view all of the leaderboard rewards, select "expand".

The guild member that reaches the Top 500 in the Hunting Fields will win rewards for their guild.

Reward requirements are as follows:

By placing a certain spot on the leaderboard, exclusive avatar frames can be acquired. The conditions for unlocking these frames are as follows:

The requirements for each medal are as follows: