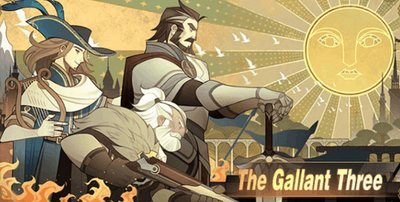 The Gallant Three are a union of Lightbearer heroes.

The mood in the encampment was light. Despite the hardships that they knew lay ahead of them, the soldiers were smiling, laughing, trading stories and jests. The fire burned merrily, sending a pillar of smoke funneling into the night sky, the sparks from the flame joining the cold light of the stars before winking out. It was only a short time ago, a few miles off, that they had watched thick pillars of smoke not so different from this one under very different circumstances. The battle with the forces of evil had been bitter and hard fought, but they had prevailed and pushed the enemy back by twenty miles. Even as the men sang and drank, the armies they’d routed were regrouping and adjusting their strategies.

Angelo took in the scene around him. He smiled, feeling the warmth from his canteen of wine spread through his limbs. He had seen these very same men who now seemed so cheerful and harmless fight ruthlessly against a terrifying foe. He had seen the fear and anger in their eyes as their brothers in arms fell around them. He had seen them kill. Every one of these simple, everyday people had risen to a challenge beyond what any of them would have believed possible. Angelo was inspired. He loosened the strings on a bag, and pulled out a lyre. He thought momentarily about the right song for the occasion. Within moments he was plucking out a moving melody, and he began to sing. The men quieted their boasts and jests, turning to listen. The song was one Angelo had composed, taking bits of folklore and bending them to rhyme. The song told the story of Morvus, the dwarven marksman. His feats of daring and marksmanship had reached a near-legendary status. The song was also better chosen than even Angelo realized, as at that moment, unbeknownst to him, Morvus himself sat and listened.

Just away from the warmth of the fire, In the darkness beside a tent, he closed his eyes and frowned. It had been a long time since he had enjoyed hearing these old stories. The memories of the events that inspired the tales and songs weren’t as sweet as a casual listener might imagine. The people in the taverns and town squares who liked to tell these tales and who would listen with rapt attention hadn’t seen the other side of the things that had happened. The blood, the pain, the sacrifice. He grasped his musket, resting his weight on it and sinking the stock into the soft dirt. He would keep fighting, like he always had, but he wouldn’t relish it like he used to. He’d already seen it for what it really was. He lifted his head and stared into the reflection of the firelight on the barrel of his weapon. How many of these men would be inspired to new heights of courage from hearing of his exploits? How many of them would die when they did that? He spat into the dirt. No way for a dwarf to think. No way for a dwarf to act, over here sulking in the shadows. He gathered his wits and stood.

As Angelo neared the end of his tune, the flap to a large nearby tent was pulled back by a rough hand. Several of the soldiers stood at attention, and even those too deep in their cups to manage standing offered a sloppy salute. It was Hogan, a knight and the general of the forces of the frontier. Though he had a reputation for being unforgiving and stern, he was respected and admired by the men he commanded. They knew that their lives and the lives of their loved ones depended on his stoic pragmatism. Tonight, however, was different. The men had scored a victory and gained ground. They deserved a night to relax and let go of their cares. They had risked their lives and made it through to the other side and were happy simply to be still be among the living. Besides, morale was as important to an army as weapons or food. A man holding a lyre and a tankard of ale approached. This must be the nobleman, Angelo. The man offered the tankard and confirmed Hogan’s suspicion.

“Commander Hogan. An honor to meet you. I’ve been hoping to find you. I’d like to compose a song detailing your deeds here…”

“The honor is all mine. I heard you singing and wanted to thank you for coming here and lending your support.”

Hogan looked over Angelo’s shoulder as he spoke, focusing on a figure standing at the edge of the firelight, then leveled his gaze back to the bard.

“Did you write the lyrics to that song?

“Yes, I’ve always been fond of the tales of Morvus”

“Did you happen to see a dwarf here among us? A dwarf with a musket?”

“Yes but surely you don’t mean…”

Morvus stepped up beside him.

“Alright, Hogan. Just tell the boy. I’m Morvus. Yeah. That Morvus. I hope you don’t believe everything you heard in those stories.”

Angelo was almost too surprised to speak.

“Most of it, actually. That was a long time ago and it was a very different person who did those things. I was arrogant and reckless, and I’m never going to be that person again.”

He stared hard at the ground.

“That’s all over though. Tonight, we’re alive and in one piece.”

He grabbed a tankard and hoisted it in the air.