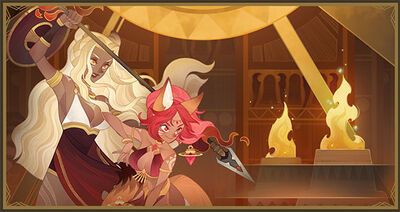 "No-one is born a warrior."

The Flame & Spear are a union of Mauler heroes consisting of Antandra and Satrana.

Even after sixty years, I still remember it as if it happened just yesterday.

It was my little sister Sanderra's seventh birthday. That day, our tribe was attacked by the Quicksand Claws

The Quicksand Claws are the fiercest and most ruthless fiends in the Scorched Expanse. They attacked when our guard was down at mealtime, trampling our tents and killing anyone who put up resistance. They then feasted on our food, slaughtered our livestock and pillaged all our valuables.

Even after sixty years, recalling that day fills me with unbridled terror, fearing for my life, I can't forget it. Before that day, I thought highly of myself, that I was well-prepared to fulfill the role of chieftain. However, when it came to it, I was just a boy, too petrified by fear to move, unable to even lift a weapon... the chieftain's twelve year old son.

Plundering our wealth wasn't enough for them, they also tied and bound the children, abducting them. The skinny children would be sold as slaves, the strong children would be kept and trained as murderous bandits to join the Quicksand Claws. As the sun was setting behind the mountains, the bandits settled down by a well, snoring raucously and full of meat and booze, leaving just two guardsmen to protect their 'spoils of war'.

All night long, the sound of sobbing and crying hung in the air. I was terrified. Whether from fear or anger, I couldn't stop shaking. The anger swept through me, clouding my senses as I couldn't vent my rage, my frustration welling up. Suddenly, I saw confusion in Sanderra's eyes, and forced myself to calm down.

No matter how, I had to find a way to get her out of here.

Just after midnight, a wave of screams erupted through the camp, "Two tents are on fire!" Hurried footsteps echoed out as the bandits rushed to the nearby lake to gather water and put out the fire.

"Damnit! It's still burning, what's going on?" a voice yelled.

The fire was bizarre, no matter how much water they doused it with, it wouldn't be completely extinguished. It would go out in one place only to flare up in another, exhausting the bandits as they rushed around desperately trying to quell the illusive flames.

At just that moment, a melodious laugh rang out from atop of a nearby sand dune. There stood a small girl with a head of fire-red hair, she was lithe and her face was concealed, quickly vanishing into the moonlight. "She started the fires! Get her!" Enraged by her mocking them, some of the bandits gave chase.

Then it hit me, this was it! Now was my chance to escape with Sanderra!

Unfortunately, just as I broke out of my bindings and began to untie Sanderra, I was discovered. Screaming obscenities, the guard took out his whip to lash me. They were watching my every move. All my rage, all my struggling, it was for nothing.

I reflexively shielded Sanderra, holding her to my chest, yet the lashing I was expecting never quite came.

"Andrey!" Sanderra's alarmed voice snaps me out of it. I don't know when this other person came into the room. Just like a leopard, she snuck in silently, cornered the guard and took him down. He bared his teeth angrily but was immediately pierced by a spear, rending him a corpse.

In an instant, she took down another guard and kicked his weapon over to me, "if you don't want your sister harmed, get up and fight!"

... Just like my father's tone when he'd admonish me

"Go and fight, Andrey. Go and see how much fear you hold, and then defeat it!"

I glanced at my terrified sister, grabbed the weapon, and gritting my teeth I hurried out behind the woman. She was awe-inspiring, like a warrior Goddess, wherever her spear went, there were few who could oppose it. It felt like I was being protected, not fought alongside. When I drove my dagger into a fiend's chest, all my suppressed anger and pain finally vented out.

By the time I returned to my senses, the remaining bandits were all strewn across the camp floor. We were free.

The girl with the fire-red hair returned. With a snap of her fingers, the flames that had just been wreaking havoc obediently died out, one after the other. As if sensing my adoring gaze, she turned to me and winked.

"I handled those morons all by myself,"she said. The imposing warrior woman responded flatly.

I brought my sister over to thank them, but it seemed they weren't keen to hang around long. The redhead lent down and tidied Sanderra's messy hair, "Sanderra, was it? Listen to your big brother. Hah... as luck would have it, I was the same size as you when I met Antandra." I heard her say.

"What happened next, grandpa?" My granddaughter blinked at me the same way Sanderra did back then.

After that, the warrior woman turned and left. The redhead skipped up alongside her, making her a racket, "How was that? I proved myself, didn't I? From here on out, I'm sticking with you!"

The warrior woman coolly replied, "That pack of bumbling hyenas was worthless. It doesn't count. Get back to the temple, old Numisu doesn't have many days left to live."

They seemed to be bickering fiercely, and although they couldn't agree on a result, they seemed to be happy. Just like that, they disappeared into the distant glowing haze...

Ever since then, I've never seen them again...