Lost in the Wild

The Final Night is a limited-time Voyage of Wonders stage available from August 4, 2021 until August 17, 2021. It expands on the story that Island of Solitude centered around. In order to collect the chests scattered throughout the stage, players must gather clues to the whereabouts of three stone tablets and subsequently assemble them. Players must also uncover who the disguised enemy on the island is.

There is 1 crystal chest and 15 gold chests to collect.

The final night of roaming the remote island is finally upon them. After days of fumbling for answers, the Heroes have finally found the key to eliminating the endless storm. The root of everything is the broiling heat deep within the volcano.

Amidst growing suspicions and jealousies, the Heroes venture out to the Volcano, eliminating the source of it all and seeking a way to return home. Yet, lurking shadows are following not far behind, and with them, the final encounter... 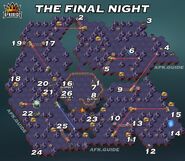 The following rewards can be obtained by collecting all of the crystal chests:

The following rewards can be obtained by collecting all of the gold chests:

Arthur: This is the source of all the trouble, is it not? The near perimeter of the island seems to be calm, yet the waves froth and tumult clearly further out to sea. We are trapped here, left for dead.

Lucius: The source of the stirring heat beneath the volcano is causing this phenomenon. Repairs on the ship are underway. As soon as this unusual heat anomaly subsides, we can leave this place.

Antandra: I can't wait to get off this cursed spit of land!

Vurk: Aren't you numbskulls forgetting something very important? Is the sea really our biggest problem right now? How about the threat lurking among us, using our own faces against us to get everyone rattled and stir up trouble? Don't go playing dumb! They definitely came here with us, stealing our looks to blend in without effort! If we don't root them out now, even if the storm subsides, we'll still be stuck here playing their murderous game.

Antandra: Now's really not the time to cast further suspicion over on another.

Vurk: This wretched place is full of traps! You really think laser beams just naturally sprout out of the ground?

Arthur: Let us deal with the source of the heat first. We just need to gather three stone tablets, and once we have them the problem should be eliminated. I shall go collect them. We shall also find the enemy among us!

Game Log: Main Task: This enemy has laid many traps here, explore carefully and uncover the disguised enemy hidden among you!

Main Quest: Talk to Vurk, Lucius, and Antandra to help Arthur get clues about the stone tablets.

[Talk to Vurk at his camp]

Vurk: Get lost! I don't trust you as far as I can spit!

Arthur: You do not need to trust me. The less you trust me, the greater your caution towards me will be, thus the more taxing it will be for me to hurt you all. If the choice were yours, would you have everyone watch a single person you regard as the imposter?

Vurk: Shove off with your nonsense, I've got my own methods for proving who is who! You want to know where the stone tablet is, don't you? There's one over there, now move it.

Game Log: Obtain the three Stone Tablets and find the disguised enemy to leave the island.

Antandra: When I was exploring just now, I noticed there seemed to be something in the cave ahead. I'd better go check it out.

Arthur: Why did you not investigate when you were there?

Arthur: A toolbox, full of items we can use for repairs. Why has it appeared here?

Antandra: Vurk lost it here. I saw him wandering around the area, he'd put something on the ground and seemed to be setting a trap. I wanted to ask him about it but he dashed off when he saw me.

Arthur: What on earth are you saying?

Antandra: I'm saying there's a huge trap ahead, so watch yourself.

Game Log: Yesterday Antandra was hurt by the imposter, she's still not recovered.

Vurk: Woah, not bad! But... The cave ahead seems pretty important, but unfortunately it's blocked by some contraption. What a pain.

[Talk to Vurk at his camp]

Arthur: Having obtained one stone tablet and some information, it would be wise to make a preliminary deduction. Among Lucius, Antandra, and Vurk, which two people are trustworthy and who is most likely to be the disguised imposter? The trustworthy ought to assist me, but should poor judgement have been passed, they may yet stab me in the back.

Arthur: Does this toolbox look familiar to you?

Vurk: Why would it?

Arthur: Allow me to rephrase the question. Did you do anything while scouting that you need to tell us about?

Vurk: Fool, I'm not wasting my breath on you.

[Suspect Lucius at his camp]

Lucius: I found a clue to the second tablet, but that area seems fraught with danger. We'd best go together and watch each other's backs.

Arthur: Are you not afraid that I am the imposter? This decision of yours is tantamount to suicide.

Lucius: I once wounded my most important comrade because of such suspicion. It made me realize that suspicion and separation is precisely what the imposter wants. They're enjoying this. I'd rather die the death of a fool than live the life of a deserting coward.

Arthur: I admire your integrity, but I refuse to accompany you.

[Slide railroad switch to the right]

Vurk: Huh, the contraption blocking the cave just moved, we can go in and take a look now.

Vurk: Don't believe me? Believe what you want.

Game Log: Lucius hid a lot of repair materials and plans to make a small boat.

Game Log: The imposter was afflicted by Vurk's poison, but they stole the antidote.

Arthur: Darnit! The way we came to the stone tablet has been totally blocked off.

Arthur: What are you doing here?

Vurk: I'm an expert tracker [...] passageway! You can quickly get here from the camp, I reckon the original trapper left this behind. Besides which, there's an unexpected surprise inside...

(Arthur enters the passageway and discovers a pile of pristine white bones, some human, some not, all strewn about the place, almost blocking the way forward.)

Arthur: ... It would seem we are not the first guests on this island.

Vurk: I was wondering what kind of person could set up such a colossal contraption with only their own strength. I'm afraid the people who arrived before us all lost their minds, maybe the imposter actually enslaved them to build that massive contraption that protects the tablets?

Arthur: If we cannot find a way off this island, the same fate shall eventually befall us.

[Enter portal back to camp]

Arthur: Lucius, please can you explain why the location you directed me to nearly trapped me with no way out?

Lucius: It's precisely because I worried about such things that I offered to accompany you, but you turned me down.

Arthur: I now have more information and should once again make a judgement on who the suspect is.

[Talk to Antandra at her camp]

Arthur: You were attacked by the imposter yesterday, and today you went deep into the volcano. Do your wounds pose you no problem?

Antandra: As a Warrior of the Temple, these wounds are nothing compared to my arduous training.

Arthur: I know you to be iron willed, but will is not infallible, bones and muscle are not soon replaced. You moved with such agility just now, as though harm had never befallen you. Will alone cannot do this.

Antandra: This is absurd! I'm so sick of everything on this island! Sick of the constant suspicion and being a pawn in someone's game! Even if it kills me, I will find the imposter! Shove your fantastical delusions, and don't bother pretending you've any sympathy! If you seeing me cry and fall apart is what it takes to satisfy your suspicions, then I'm afraid I'm going to disappoint you!

Antandra: Actually, I already found it. I'll give it to you.

Arthur: This is somewhat unexpected.

Antandra: I want to bring an end to this vile situation as quickly as possible, so I decided to come and investigate earlier. Seeing as we have all three tablets, we can go directly to the heat source and wipe it out!

Arthur: Hold on. I still want to explore the area myself and check for any other clues.

Antandra: We already have the tablets, so let's just go and deal with the problem! Why waste time?

Arthur: Because seeing is believing.

Antandra: Fine, if you insist. See if there's anything else. But still, if there is anything, it is best we find it together.

Arthur: I caught the scent of blood at that location, it would be wise to take a closer look.

Arthur: A dagger? I recognize it. The imposter attacked Lucius with it when they were disguised as Belinda. This must be Lucius' blood. But, Lucius said the imposter fled with the dagger, so why has it appeared here? Perhaps we should ask Lucius to explain. It appears we have another issue at hand... We seem to be surrounded.

Game Log: A dagger stained with Lucius' blood has appeared in the cave.

Arthur: The mechanism operation panel is damaged, resulting in the elevator next to it not being lowered. Someone is intentionally hiding something. There is some brown and white animal fur stuck to the Mechanism Operation Panel. It may yield some clues.

Game Log: Use the tools to repair the damaged mechanism operation panel.

Game Log: The elevator mechanism was destroyed by someone trying to hide a glass bottle. The destroyed mechanism has brown and white fur on it, which probably comes from some kind of animal.

Arthur: There was nothing important, and the path back was impassable. Our primary concern is to return with the tablet. There are complex mechanisms here, it may be possible to find a way to other areas provided we are eagle-eyed.

Arthur: The three stone tablets have all been collected, and now it is time to make the final choice. I ought to have all the clues I need to uncover the identity of the imposter!

Arthur: The place you led me to contained nothing of worth, it was a dead end with no way out. Explain yourself.

Antandra: I did tell you there was nothing there, that it was a waste of time to explore the area again.

Arthur: Did you happen to break anything while you were investigating the area?

Antandra: I likely smashed a bunch of things, I've no clue what exactly you're referring to.

[Identify Antrandra as the suspect]

Mehira: Not bad. After being toyed with for so long, you finally wised up. How thrilling! I can't wait to ensnare you for all eternity, you'll be my obedient slaves!

Arthur: What have you done with the real Antandra?

Mehira: Why do you even care? She's still asleep at the camp. I won't mistreat her, after all, she's a tough cookie, my favorite kind of plaything! As for you... I guess we can play for a little while!

Arthur: It appears you do not understand your own situation, for it is you in deep peril! You could manipulate us before only because you could blend in with us, our suspicions prevented us from being at our best. But now, the heat source has been destroyed and your identity has been discovered! We have no reason to hold back! Come at me! Let us end this farce!