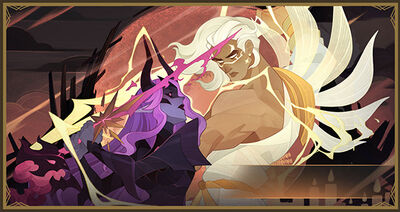 "When it comes to us, justice does not exist."

The Final Choice are a union of heroes consisting of Zaphrael and Lucretia.

1. The Record Keeper
My name is Abel. My grandfather is a church historian responsible for compiling records for the Lightbearer Temple. It's been over 40 years since we saw the end of the Hypogean War.

Gods and Ancestors of every faction sacrificed much in exchange for that peace. Recording the glorious deeds of these heroes is my grandfather's job. According to him, those that achieve great things shine like brilliant stars, forever glimmering in the night sky of history. I once helped my grandfather sort out some of the historical data, and it was then that I discovered an omission from the history books.

"...The 61st year of the Lightbearer calendar, winter. The war between Humanity and Hypogean has been going on for over 30 years. Despite the aid of other factions, the suppression of the Hypogeans has been too much for Humanity, and they show no sign of recovery. To save Esperia, the Goddess Dura created a huge anomalous space between dimensions that would be used to seal away the Hypogean...

The Lightbearer's founding Emperor, Ancelot, lead his army and the armies of every faction united, driving the Hypogeans to the foot of the mountains, where Dura then opened the Barred Gate and managed to seal away most of the Hypogeans."

Those words were the words of my Grandfather when he recorded the heroic events of that war more than 40 years ago. Yet, there is one pivotal name that has not been included, and who was absolutely vital to the campaign against the Hypogeans - The God of Thunder, Zaphrael.

His deeds and words seem to have been entirely omitted, his existence deliberately erased from this legendary battle.

It is impossible to put down to mere oversight. After grandfather passed away, I took some time to travel and tried piecing together Zaphrael's story from all kinds of sources, but despite everything I came up empty handed. I decided to visit my grandfather's old colleagues in the clergy and fellow historians, and they, too, kept silent on the matter. I believed I was going to live my whole life without ever finding the missing puzzle piece. That is, until I met them.

I was in a small town at the westernmost edge of the Empire, beyond which was a barren wasteland.

I briefly stayed in the town to see through the winter. That day, nightfall was approaching earlier than usual. Just as always, I played a few bars on my violin and hummed a few ditties, surrounded by the aroma of the inn's wines and seared meats.

They're mostly tunes regaling stories of the greatness of Emperor Ancelot. Once that battle ended, his deeds became legend all throughout Esperia.

Sat at the opposite table is a peculiar old traveler, the ends of his silver hair just peeking out of his hood. These small inns often have rooms for weary travelers in need of a night of rest, so at first I was totally oblivious to his presence.

Until, that is, he bought me a drink and offered to tell me a story that I had never heard before.

2. Old Traveler's Tale
It was a story about Zaphrael.

Over 40 years ago, the allied forces, lead by Ancelot, faced with a brutal attack from the Hypogean forces. Seeing the Allies and the Hypogeans were fully engaged in combat, one particularly strong Hypogean snuck behind lines and into the Allied base - Wardhurst Stronghold.

"The garrison took a serious hit, even Bishop Hind was killed... Once Wardhurst Stronghold fell, rumors about Zaphrael and a Hypogean began to spread like an unbidden disease."

The loss of Wardhurst Stronghold is certainly recorded in the historical records, but I knew nothing about any rumors.

"What kind of rumors?"

Hearing this, I felt some doubts. According to the records, Zaphrael was the most impartial and stoic of all the Gods, how could he possibly have allowed a Hypogean to go free? Despite my concerns, I keep listening, not daring to interrupt.

With the spread of the rumors, so too spread the distrust in Zaphrael, with a few particularly radical people even accusing him of failing to be worthy of his godhood, accusing him of causing the fall of the Stronghold.

"No-one knows how the rumors came to be... but they served their purpose. The Allied forces are no more, and people doubt the oracles."

"Once a flame of doubt has been lit, it is difficult to extinguish. Yet, from start to end, Emperor Ancelot believed in Zaphrael, even when his own 12 year old son, Marche, was lost during the Stronghold's fall.

"The Hypogean responsible for the attack on the Stronghold, she knew everything there was to know about him, and she used it to her advantage." The traveler fell silent for a long while.

There's no mention of anything like this Hypogean in the records of the fall of Wardhurst Stronghold, it doesn't exist. Who on earth is this Hypogean? I unconsciously sat up and leaned in ever so slightly. Even though the traveler had only just begun telling the story, I was already deeply invested.

It was a horrific battle. The blood of hundreds of elite guards stained the white snow of the Rift crimson red, the wind and snow whirled with Hypogean roars as they tore human limb from limb and trampled their bodies and armor into the blood-soaked mud. Overwhelmingly powerful, the Hypogean forces blocked off every exit, ensuring retreat was impossible for Ancelot and his unit.

Ancelot was down to his final two guards, when Goddess Dura finally succeeded in opening the Barred Gate, and Zaphrael leapt into Bitter Rift to reinforce and save Ancelot.

"Ancelot had intended to sacrifice himself for the sake of humanity, but perhaps in Zaphrael's eyes, Ancelot represented new hope for the human Empire."

With Zaphrael's appearance, so too appeared that same nightmarish, garrison wrecking Hypogean. This time, she came for Ancelot. She lunged towards Ancelot like a streak of pure evil, and despite Zaphrael's counterattack, she still takes Ancelot down.

I had heard long ago that Ancelot was a solider his entire life, and that he had lost his left eye during the Hypogean war, but I had never imagined such a terrifying plight.

The old man continued his story. The temporal anomaly at Bitter Rift is beginning to burst as the Barred Gate pulls in Hypogeans. Zaphrael and this Hypogean demoness fight near the Gate's edge, golden lightning arcs roaring over the Right as the Hypogean cleave through the storm clouds one after another.

"You should've come after me," Zaphrael lamented, his usually solemn voice tinged with sadness, "Marche... He was just a child..."

"And what about Owain!?"

The Hypogean's face contorts with rage, her sword slicing through a bolt of lightning, her eyes flickering with malice.

It was a ruthless fight. With both the Thunder wielding God and the Hypogean wielding the Dark Star wishing death upon each other, doing all in their might to exert lethal force enough to end the other.

However, Hypogeans are no match for the Gods. Finally, she is seriously injured and kneels at the cusp of the Barred Gate. Zaphrael faces her, the long spear of a hunter forms in his hand. All he has to do is throw it with all his might, and the Hypogeans life will be extinguished. Yet, he can't help hesitating. The two minds at work inside the Hypogean see their chance, goading and mocking him in an effort to shake his determination.

"God of Thunder, take a look... Do you see what you've done to her? What monster she has become? Is that your justice?"

"I'm sorry about Owain." Zaphrael ignored the taunting, looking straight into the Hypogeans hate-filled eyes. His usually dignified tone was now low and hoarse., "If I had to do it again, I would... But this time, Lucretia, there's no justice... We have been trapped by our mistakes... And this mistake has to end, but... I will end it with you."

The bolt in Zaphrael's hand dimmed, his mind seemingly made up. He took a final look back at Ancelot, bidding his last farewell. Suddenly, he charged at the Hypogean, allowing her blade to pierce his shoulder as he hugged her tightly, pulling her down with him into the Barred Gate, both pulled into the vortex's core.

At this very moment, the energy flow of the Oblivion Gate exploded, swallowing the entire Bitter Rift in the blink of an eye.

After hearing this whole tale, I couldn't unwind for a long time. I had some thoughts and conjectures, but I was still confused by the whole thing. "According to you, if Zaphrael hadn't come, Ancelot would've died in Bitter Rift, so why on earth would such important deeds of heroism be swept away?"

The traveler said nothing, but I followed his eyes and look over to the folks praying piously. The Lightbearer Temple's reputation has peaked in these last few decades, and every corner of the Empire feel its influence, so even here in this tiny town, there are devotees.

"Your songs are beautiful." The traveler said a little absent-mindedly. "And Zaphrael... He was the most devoted disciple I've ever seen. He did what he had to do, and that should never be forgotten... It's just, the Sanctum is like a pure white light, and they don't want it to be dirtied. As a God, he cannot shirk his responsibility and let her walk away... Because that Hypogean woman, Lucretia, is not just anyone. She was once Zaphrael's wife."

The candle has burnt out, the traveler has drunk his wine.

He drops two copper coins on the table and gets up to leave. "Wait a moment!" A questions suddenly dawned on me. "How do you know so much about a situation that only Ancelot and his last two bodyguards could've seen?"

The old man stayed silent, walking to the door of the inn. His back was as straight as blade sheathed after a long battle.

As the door slowly opened, a beam of morning sunshine came through. That beam of light illuminated the face under the travelers hood. A face with sharp edges and a wise, unshakable resolve. However, the most striking detail was surely the deep scar etched into his left cheek, crossing his left eye.

3. Future Generations
The stories of heroes live on in immortality, but alas, mortals grow old.

My time is short, and I can feel my life ebbing away from my body. As my body aged, it hasn't been so easy to travel. After thinking about it for a long time, I decided once I put pen to paper, I should make a record of Zaphrael's story.

If even one person sees it, I will consider myself fortunate. No matter whether or not history tries to silence them, some people will always shine like bright stars in the night sky of history.