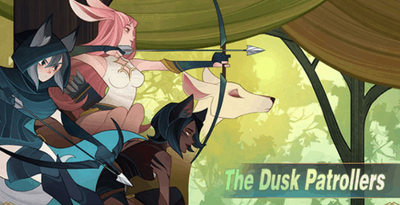 The Dusk Patrollers are a union of Wilder heroes.

A sharp black shape stabbed through the Hypogean officer’s heart. It slumped to the floor, still wearing a vicious twist on its face. Kaz flicked the blood off her darkened blade and wiped what remained on the grass as she stooped to grab the foul thing under the arms and drag it to a shadowy corner of the encampment. Her eyes darted back and forth as she pulled the dead weight through the grass, the only sound its armor rustling through the dark.

When she arrived at a safer location, she began rummaging, checking pockets, boots, and anywhere else that something of value might be found. She was here to kill whichever officers she could find without detection and gather what intelligence she could. Her long ears twitched. More were coming. It sounded like three of them, likely guards on patrol. She paid them no mind and continued feeling through the pockets and armor of the fallen lieutenant. She was tucked away out of sight, safe in the shadows. Surely they wouldn’t see her. The patrol rounded the makeshift barracks and suddenly Kaz was illuminated. She was right about there being three of them, but what she hadn’t expected was the bright light emanating from their eyes, freezing her there in a blind panic. The leader shrieked as an arrow appeared in the small openings of each guard’s armor. They fell, and Kaz turned toward a massive old tree some distance away, signaling her gratitude. Her backup, Ira, saw her and remained still. Kaz gripped something in the demon’s boot. Some kind of scroll. She moved quickly and quietly with her prize back toward the edge of the encampment and the tree in which Ira was perched. The archer dropped from a low branch, the only sound a barely audible flutter from her dark cloak.

“Good shooting, as always.” Kaz said through a slight smile.

“It’s nearly dawn. Let’s get back with what we have.”

Ira looked toward the tree line and slung her bow on her back.

“I don’t have enough arrows to deal with all of them once the dead are discovered. Come on."

They set off, slipping through shadows when possible and stepping lightly, hunched and hurried, when exposed. It wasn’t long before the bodies were discovered and the alarm raised. There was a sound of many wings beating against the air as the enemy began to spread in every direction, searching for the intruders.

Kaz and Ira were making good time, but day was coming and the light would betray them to the searching eyes high above. They had to move faster. There were patrols everywhere. Sneaking past them in the dark of night was simple enough, but this wouldn’t be so easy. Ahead, a small group of sentries stood guarding a smaller forward garrison with weapons at the ready. They hadn’t yet noticed the two dark forms moving swiftly toward them.

“We’ll have to break our way through’ whispered Ira, ducking behind a large rock.

Kaz nodded once and moved ahead. They both knew what to do. Just as the nearest sentry began to turn its exposed back away from Kaz’s approach, she leapt forward, thrusting her stiletto into its back in the same instant that a flit of arrows landed in the chest and neck of another. They fell without any screams, but there were too many eyes in the vicinity. More of the enemy filed in, neither raising an alarm in full nor giving the two Wilders a chance to escape.

The Hypogeans fell in ones and twos as they came to investigate the suspicious noises, but finally the assassins were found out and what remained of the garrison rushed out to encircle the embattled pair. Ira’s quiver was empty. A few of the enemy took some haphazard shots with their strange weapons. A short, black bolt buried itself in the flesh just below Ira’s shoulder. Kaz put one of her daggers in Ira’s good hand, giving her a resolute look. If they were to die here, they would do so under a mountain of slain adversaries. The captain of the garrison raised a gnarled hand and roared the order to charge. Kaz grimaced, Ira snarled, and both raised their blades, bracing themselves for the tide of violence ahead.

The underbrush in the nearby woods burst open, and a group of Wilders with graceful bows and slender blades jumped forward. The Dusk Watch. A powerful voice rose above the surprised shouts of the Hypogeans.

Lyca sat astride a beautiful white doe, loosing arrows in rapid succession. It seemed that she hardly aimed before letting them fly. They glowed a bright white, and left silvery trails behind them as they arced toward their victims, each one finding the heart of its target. The enemy was in disarray. Some rushed forward, hoping to score a fatal strike on the two they had thought done for. Others turned to meet the new threat from the trees. The fighting was ferocious. There were screams and the sound of blades ringing against one another, grunts of surprise and pain, and always the silver streaks following Lyca’s arrows to visit destruction on the invader. Even so, there were too many for the Dusk Patrollers to maintain the upper hand much longer. Lyca rode forward alone, now firing at foes only a few paces away. Her mount jumped through an opening carved through the enemy ranks. She pulled the wounded Ira, now pale from blood loss, atop the doe. She shot a quick look at Kaz without slowing her fire.