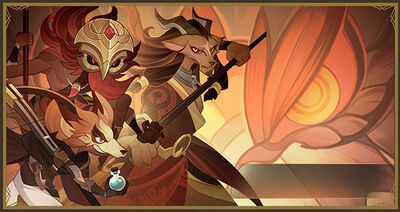 "Patience is a hunter's greatest weapon."

The Dragon Slayers are a union of Mauler heroes.

The Hall of the Hunt is a raucous place, even by Mauler standards. A great many trophies adorn the walls, heads and claws and fangs of terrible and exotic beasts illuminated by flickering braziers. The smell of roasting meats hangs heavy in the smoky air as horns of dubious brews are passed about, tales of adventure and bloodshed are shouted into eager ears, and challenges are made and accepted. Tonight though, the hall was eerily subdued. The Maulers, representing near every tribe in the land, exchanged oddly reserved remarks and glanced frequently toward the massive doors that marked the entrance. There had been word of something big.

There were a few scattered cries of surprise from outside and the doors burst open, a mud and blood-splattered trio framed at its center. The assembled Maulers rose unconsciously, lowering their mismatched containers of flamewine and grub mead. Numisu, Vurk, and Saveas took in the scene before them, basking momentarily in the awe of their peers. There was a pause, an expectant silence during which only the crackling of the flames made a sound, and then Saveas thrust aloft the trophy he carried. A fang, equal to his forearm in length and still darkly bloody at the root. The hall erupted into a roar of approval. Tonight was going to be good.

Numisu stepped forward. "My totems warned me of a great trouble in the Bone Glade. The threat that turns hunters into prey. Even the most skilled among our tribes would be in great danger to seek the creature. It was these two who rose to the task. I have witnessed their courage and prowess, and I have brought them here. They shall be honored in the Hall of the Hunt!"

"The thing from the stories! Did they kill it?" A voice blurted from the back of the crowd.

"Indeed we have. But it was mostly this crazy goat!" Replied Vurk, leaning with his arm on Saveas' shoulder. His body weary, but his tongue alive as ever.

Numisu raised both hands, arms spread wide in the air. "The new Wild Slayers stand before you!"

The hall erupted again in cheers and roars as frothing drinks were thrust into the air, sloshing out over the mass of elated hunters. Only a few in a generation could be granted the immense honor of being named Wild Slayers. Just to be present in the Hall when this occurred was cause enough for celebration. The three new arrivals were given hearty slaps on the back, pungent draughts pushed into their hands as they were ushered roughly toward the place of honor.

The story of the hunters' quarry had become legendary over recent years. A dragon had settled in the Bone Glade, cunning as it was monstrous. Campsites were found empty and ravaged with only the trails of blood leading back into the glade as clues. Hunting parties and storied warriors alike went into the glade seeking the beast and never returned. It became a feared place where only the bravest and most reckless would journey.

The crowd was gathered around the three weary hunters, pressed in tight, they listened with rapt attention to the recounting of the kill. Saveas was his usual quiet self, but Vurk was reveling in the glory, standing and gesturing with every word. Numisu simply looked on with a wry expression and took long sips of something that bubbled and smoked.

Vurk had the audience hanging on his every word. "I trusted my gut, you see. My hunter's instinct. It's not something you can learn. It guides you like the wind pushes the grass. I knew where to find the beast because I could feel where it had gone..."

Vurk nodded. "Aye! The totems showed you what I suspected. Lucky for us I picked up the trail. We tracked it back to its home using every bit of cunning we could muster. I was glad to have this ferocious goat behind me."

Numisu cocked his head. "I was watching from afar. The totems showed me your progress. Was it not Saveas who led the way?"

Vurk shrugged. "Sure maybe the lad ranged ahead from time to time. These things get mixed up on the hunt. I was focused on our quarry, see. Either way, Saveas was a top notch helper."

Saveas gave his companion a sidelong glance and silently sipped from his horn of mead.

Vurk continued. "The thing was monstrous! We came upon it undetected, but it didn't go down without a fight. When it roared the leaves shook from the trees, and the blasts of air from the beating of its wings nearly sent us flying. Its fangs were twice the length of my own body!"

Saveas furrowed his brow, looking down at the fang he still held in his hand. It was massive, to be sure, but failed to live up to the description.

"We dodged, ducked, and rolled! Swipes of claws and gnashing of jaws alike narrowly missing us! The thing's hide was too tough for our weapons to get through. Our steel was going blunt on its scales with each strike! Just when we thought it couldn't get more dire, the monster started spewing poison at us!"

Numisu gave a questioning look at Saveas. The hunter leaned in and said softly, "Spittle."

"I'd hit the thing with every bolt I had and nothing was sticking! It was the goat who hit the weak spot. A leap straight at the creature! I thought he was going to jump straight down its throat! Well, the dragon thought so too. It lunged up with its jaws wide open, ready for a snack. What'd it get? A spear through the eye! I could hardly believe what I'd seen. Here I'd been shooting for the heart, shooting for the neck, shooting everywhere but the eye, and then this one comes and takes all the glory!" Vurk punched Saveas' shoulder for emphasis.

Saveas downed the rest of his drink and said "No, friend. Not all the glory. Those bolts from your crossbow hurt the creature. They angered it and made it reckless. You darting in and out from under its wings had it looking for you instead of devouring me. If you hadn't been there, I'd be dinner now."

Vurk paused for a moment, a smile slowly forming. "Well then. I suppose that's true for both of us. It's settled then! We share in the glory. Barkeep! Flamewine!"