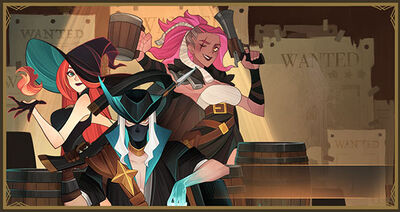 The Bounty Hunters are a union of Lightbearer heroes consisting of Mirael, Raine, and Fawkes.

The patronage at The Rusty Anchor was more rough and tumble than usual. A series of attacks on the nearby port town had discouraged travelers while drawing in nearly every bounty hunter and mercenary for a hundred leagues.

Of particular interest among the gathered was the Bounty Board. Here the constabulary would post new bounties. Everything from tracking and retrieving lost livestock to tracking and destroying a lich lord could be tackled for a good coin.

The small crowd perusing the bounties buzzed with discussion about the jobs posted. Two grizzled Dwarves stroked their beards while debating the likelihood of finding a treasure chest supposedly hidden in a nearby mine, suspecting the local lord probably just wanted to send in someone to clear out anything nasty that might have made the mine a home.

A young man heatedly tried to convince his companions that they could take on the bandits who had been stealing from the surrounding villages. The buzz died down as an unlikely-looking woman approached, clad head to toe in black. The others nervously edged out of her way, jostling with their comrades to clear a path.

Mirael smirked, barely noticing the crowd. She scanned the board. Most of the jobs were on the mundane side or too good to be true. She sighed two long threads of smoke from the corners of her mouth and trudged over to the bar and glared over the people seated on the barstools.

No seats left. She snapped her fingers and instantly sparked and pointed to the toe of a man's shoe, which instantly sparked and set alight. When the wearer of the shoe noticed two seconds later he jumped up, hopping around on one foot and trying to kick off the flaming footwear. Mirael sat. "Barkeep! A pint!"

Two shadowy figures seated in a far corner watched with still eyes. They looked to each other. No change came over their faces, no slight twitch of muscle could be observed, but they came to a consensus.

A faint vibration rose from the floor of the building. Again, but stronger. Some noise now accompanied it. Everyone, at this point, was looking around, bewildered except for Mirael and the two figures, now staring across the inn at each other.

The crash that sounded was a tree, having been ripped from the ground like a weed, used as a club to smash another tree in half. A deep, hoarse bellow drowned out the scared noises inside as if it too had been voiced on their side of the wall.

Most of the adventurers began hiding under tables and crowding behind the bar. The three who had been frozen in their odd standoff filed out the door.

The thing before them was something that was, mercifully, extremely rare. It was a vaughur, a gigantic beast from the sea that could, not so mercifully, survive on and travel over land. With their long limbs, they stand as tall as tree men. Their claws and jaws can bisect a horse with a snap. Their eyesight is poor, but their hard carapace is effective protection against small weapons and, strangely enough, magic.

In the water they are docile, living mostly as scavengers, they can easily become enraged on the odd occasion that they are driven to land. The attacks on the port must have driven this one on to the shore. It stood at the edge of the clearing, black claws glistening and clumps of white barnacles shining in the sun on a blue carapace the same color as the sky above it. It let loose an ear-piercing shriek from between countless rows of teeth, and Mirael attacked.

The fireball hit the creature square in the face, but seemed to irritate it further rather than harm it. It rushed toward her and she only just got the flame wall up in time to deter it. It stalked around the burning perimeter, snapping at the flames.

Mirael followed it with her eyes, hands held at the ready, a ring of fire around each. Meanwhile, the shadowy pair circled the scene, taking their positions. The woman stood well back, taking aim as the man crept low and almost imperceptibly slow toward the monstrosity.

When the man reached a certain point near the beast and his stealth become more likely to become compromised, the woman began firing. The shots were as regular as they were precise. Most of the rounds glanced off the carapace or lodged in it, causing no harm, but a few hit relatively softer joints and drew a thick, greenish blood.

The vaughur bellowed again with a screech that made Mirael wince and turned toward this new threat. Just as it was steadying itself for a charge, the man closed with the beast, rushing in silently behind it and placing his left hand on the creature's leg.

The thing immediately went silent, its black eyes clouding over as it went slack. Then man's flesh on his hand and arm was glowing an eerie blue, and it seemed to ripple. When he took his hand away, a blacked pit was forming on the creatures's leg, dark tendrils of color spreading from it, widening as the edges of the mark flaked and fell away like ash.

Finally, a swooping gout of flame hit it from the side, causing it to stumble and collapse. This time, the fire caught along the corroded edges of the corruption. The carcass produced an inky black smoke.

"Why did you come out to fight?" Asked the woman.

"Why were you watching me?" Asked Mirael.

"Because we saw the same thing in you that you saw in us. I'm Raine, and he's Fawkes, and we're looking for a third. We were thinking maybe a fire witch."

Mirael inspected her fingernails. "Well, I was thinking that I could use a couple of tough types around to take on the boring jobs. Sure. Why not?"

Raine smiled. She knew what Mirael was really saying. Fawkes, as usual, said nothing. Raine placed her hand on Mirael's shoulder. "Welcome to the team."