"In the foremost gale, my sturdy blade, swings true."

Thane - The Veiled Wind is an agility-based Ranger awakened hero with Burst Damage role of the Lightbearer faction. 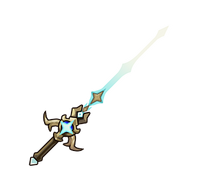 Prince Lester's light one-handed sword. After being imbued with the elemental power of the wind, it is as light and sharp as the wind itself. Finding an enemy's vulnerability has never been easier.