The Temple of Ascension is a feature in AFK Arena that is located within Ranhorn. This is where heroes can be ascended in order to upgrade to a better hero tier, requiring a cost or sacrifice of other heroes in a player's roster. A player is required to ascend their heroes in order to progress in the game.

The Temple of Ascension is available after a player completes Chapter 1 of the Campaign.

The Temple of Ascension, one of the holiest places throughout the lands of Esperia, was established to pay tribute to the one true god of life, Dura.

During the last great invasion of Esperia it was burned and rebuilt. Thousands of years later it stands at the heart of the sprawling city of Ranhorn, where the faith of light was reborn.

Ascension is a process where the tier of a hero is improved, therefore increasing their stats and level cap. To ascend a hero, sacrifices are required. Some factions have unique costs, and each tier has different costs as well. The sacrificed heroes used as a cost will give the player their total Hero Experience points, Gold, Hero's Essence, and all Gear back to the player.

The first chosen hero will always be the hero that will be ascended: the next chosen heroes are treated as costs.

The general factions include Lightbearers

. These factions have the same ascension costs for each hero tier. Below is a table of hero tiers with their corresponding costs.

Special factions include the Celestials

These factions have simpler ascension requirements than a hero and require fewer sacrifices.

All tiers, except when ascending the hero to Ascended, require a cost of an Elite+ of the same hero.

When ascending the hero to Ascended, however, the cost is 2 Elite+ of the same hero instead.

Heroes of this faction can simply be fused with the highest hero in the player's team to achieve that same ascension and level, a process known as "soul fusion". Any resources normally used to level up a dimensional hero will be returned to the player when they become fused. While in a fused state dimensional heroes may not be leveled up normally.

Additionally, dimensional heroes may not be used simultaneously in battle with their fused target heroes unless a Dimensional Key is used. Two fused heroes may be unfused at any time, however this process requires 100 diamonds. 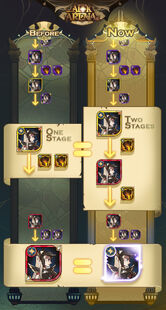 The new ascension system compared to the old system. 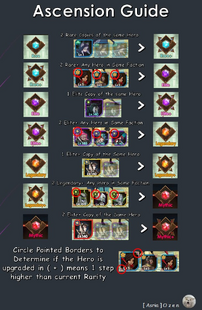 An old guide of the old ascension system.