Talene - The Resurging Flame is an intelligence-based tank awakened hero of the Celestial faction.

She was originally revealed in The Phoenix Descends.

The passing years have done little to dull Talene’s memory of her mother’s death.

Her mother’s round flame shield splintered under the relentless attack of the Hypogean, Framton. Talene, still a Phoenix youngster, stared in horror, seeing her usually beautiful, strong mother using the very last of her flame power simply to hang on. As the monstrous Hypogean blaze raged ever fiercer, Talene’s heart was heavy with desperation and helplessness. Unable to bear the sight any longer, her legs shaky and hesitant, she finally heeded her mother’s warning to hide. Terrified, trembling, and powerless to help, she could do nothing but look on as her mother’s shield finally shattered. The purplish-red raging flames drew closer, licking at her mother’s form before finally devouring her whole…

Ever since Talene had been reborn from flames, she was following the trail of the Hypogean, determined to track him down. She resented her perceived cowardice, even at such a tender age. She believed that her mother had sacrificed herself to save her, and that her mother’s defeat at the hands of Framton was the result of her, Talene’s, weakness. She burned with the desire to exact revenge on her mother’s murderer with her own hands. Only then might she atone for and cleanse away the shame of her childhood cowardice.

For Talene was no longer the weak, defenseless bird of her youth, and the Solaris Flare had become her vehicle of vengeance. Relying on the power of the Solaris Flare, Talene had been hunting down Hypogeans wherever she could, trying to discover the whereabouts of Framton. Eventually, with most of the Hypogeans incinerated in the cleansing solar fire, the last of the Phoenixes was hailed as a hero by the mortals of Esperia.

But as long as that Hypogean still lived, her flame of vengeance would never die.

One day, hot on the heels of a quarry, Talene came to the Dark Forest. There, after her usual business of slaying a trouble-making Hypogean, Talene came across an odd creature, hidden in a clump of grass—the sprite Astar, sprung from a Phoenix Flower. A merry, warm flame burned above the little sprite’s head, and her eyes beamed as she gazed at Talene. The Phoenix Flower was born from the Solaris Flare, so perhaps this common element was the reason for Astar’s instinctive affinity with Talene. She seemed to view Talene as a parent, sticking by her wherever her path led. At first, Talene was too focused on her bloody revenge to give much thought to Astar. Finally, after several unsuccessful attempts to rid herself of Astar, Talene resigned herself to the fact that she wouldn’t be able to shake her unwanted accomplice. Perhaps even Talene herself failed, at first, to realize that Astar’s appearance had given her a feeling of companionship—a feeling she had lost long ago.

Astar’s dependence reminded Talene of just how much she had relied on her own mother, all those years ago. In Astar, Talene seemed to see a past version of herself.

The Dark Forest was not always peaceful, with sporadic Hypogean incursions occasionally breaking the tranquility. Whenever Talene efficiently dispatched yet another Hypogean, Astar would often imitate her actions, mimicking a burst of flame. The problem was, Astar’s command of fire was still immature, and her lighthearted imitations often caused trouble. While Talene was amused and gratified by Astar’s antics, she was also a little worried. After all, her ultimate goal was vengeance. There simply wasn’t time, on the road to revenge, to look after Astar.

One day, with another Hypogean vanquished, Talene decided to let Astar master the power of flame. She hoped that afterwards, Astar would be better equipped to defend herself. Talene began to purposely develop Astar’s ability to control flames. Under her careful guidance and instruction, Astar gradually grew proficient in the techniques of manipulating and controlling fire. She would no longer accidentally scorch the ground where she walked, instead, was able to precisely manipulate the flame she carefully cradled in her hand. She even grew skilled enough to use her flames to complete delicate, complex actions.

Their days of peaceful coexistence did not last long. The moment she was sure she had picked up Framton’s trail, Talene knew it was time to go their separate ways. She waited until Astar was asleep before packing her belongings. Then, alone once more, she set out on her renewed quest for vengeance. After scouring the forest to no avail, she soared high above, looking down and scanning the trees for any sign of her prey. Suddenly, in a clearing a little way ahead, she spied two figures. One was the Hypogean for whom she had spent her life searching high and low, while the other was… Astar!

It just so happened that Astar, upon waking up and finding Talene gone, had started looking for her all over the forest. It was a sorry twist of fate that, during her search, she had accidentally stumbled upon Framton.

Almost tasting the iron tang of vengeance, Talene formed a flaming sword and swooped, diving down, slamming into Framton, and knocked him flying. She turned around, shielding Astar with her body, before looking warily towards where the Hypogean had fallen. Despite the smoke and dust which filled the air, Talene knew that Framton would never be so easily vanquished.

Out from behind the trees came Framton, chuckling malevolently, as his body burst into violent, purple flame. Infernal fire shot through the dense smoke and collided with Talene in the air. Forced back down to earth, the demonic Hypogean and the divine avian joined in a bitter battle amongst the trees. At first, the Solaris Flare gave Talene an edge in combat. But, as Framton gradually acclimatized to the scorching heat, she suddenly found herself on the back foot. The Hypogean seemed to somehow swallow the incandescent Solaris Flare which covered his body, before belching out a raging torrent of infernal fire. The magic flames moved, concentrating on his huge fists, and he felled Talene with a mighty blow.

As the dark, searing flames gradually obscured her vision, Talene felt as if she had been transported back to the fateful day of her mother’s death. She had been so confident that vengeance was assured, possessing as she did the Solaris Flare. But, with reality reflecting once again the terrible image that had been burned indelibly into her memory, she stumbled. Talene realized that the crushing fear, etched into her very soul as a youngster, had never been completely dispelled. Talene’s hands trembled as the familiar feelings of despair and helplessness enveloped her once again.

Framton smiled greedily as he slowly approached Talene, hoping to seize the remnants of the Solaris Flare. Just as all hope seemed lost, a young, tiny figure stood between Talene and the looming Hypogean.

Seeing the vulnerable, weak but stubborn figure in front of her, Talene’s heart swelled with grief, as the pain of losing her mother mingled with the image of Astar being hurt. Disregarding her own safety, she gathered up Astar in the shelter of her arms. Then, lifting one quivering hand, she called forth a protective shield, just as her mother had done all those years ago. Finally, her strength almost exhausted, she urged Astar to flee.

Under Framton’s frenzied attacks, the shield was soon on the verge of shattering. Astar’s courage vanished like smoke in a high wind and she ran, sobbing. Talene watched Astar flee, barely mustering the strength to keep fighting. Her shield splintered and was close to breaking, Talene braced herself against the earth, unwilling to fall. Both relief and defiance showed in her strained expression.

Under the Hypogean’s corrosive, insidious flame, her shield finally shattered with a huge blast, the explosion sending Framton flying. Talene couldn’t bear the struggle any longer. She collapsed to the ground, the flames above her head spluttering, all but extinguished. Her vision blurry and indistinct, Talene thought she saw the tiny form of Astar staggering towards her. Astar threw herself onto the prostrate Talene and began pouring all her own flames into her body.

Astar’s fire suffused Talene. The flames above her head strengthened and flared up, and a raging blaze gradually engulfed her. As a pure, brilliant radiance burst forth from Talene’s body, the color of the dancing flames suddenly changed. The cleansing, bright flame pierced the purple, demonic glare, melting away the Hypogean fire like snow under the burning midday sun.

Talene opened her eyes, seeing the pure blue of a sunlit sky, as her Solaris Flare shone over Esperia once again. And so it was that the last of the Phoenixes was reborn yet again.

“As long as the sun still shines, so too shall a Phoenix walk the fertile land and soar in the shining sky.”

Item: Heart of the Phoenix 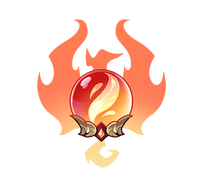 A core stone formed by the coalescence of flame and at the heart of the Earth, it contains pure Solaris Flare. The radiance of the sun overflows from it.

Upgrade Skill Blade of Resurgence Lvl, After Talene brings her Blade of Resurgence down upon her enemies, the ground before her is set ablaze for 5 seconds. Enemies standing upon the burning ground are dealt 120% worth of Talene’s Attack Rating every second. 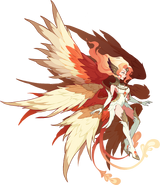