Solise is an intelligence-based mage hero of the Wilders faction. She can stun enemies with her vials, summon a floral specter to fight on the battlefield, and bless an ally with reduced damage and an increased attack rating.

Solise's ultimate skill "Blossom Fall" stuns enemies and summons cherry blossoms throughout the battlefield that grant her other abilities a temporary power increase.

Solise is a born flower whisperer. She is gifted with a special connection with the growing things of the forest. Her personality resembles a thriving plant: full of vitality and energy, loving, and helpful. She is a very beautiful lady, she cares little about seeking the spotlight. Instead, she is always lost in her own world of research. For Solise, nothing is more important than her study of botany. She has a very inactive social life. It is fair to say that she fears interactions with others. She would rather talk to flowers than humans, as it offers her a greater sense of security.

Ulmus is a Treant born in the Dark Forest. He sees through Solise's out-going pretense and understands that she is a shy, introverted person. He cares for her and is a cherished friend of hers. Whenever Solise makes a new discovery, she will always tell Ulmus in no time. What later happened to Ulmus helped Solise grow stronger and more determined.[1]

The majority of Wilders believe that all living things have a sort of soul, a portion of the living force Dura bestowed first upon the world when She created life, and again when her own lifeblood spilled into the soil. Thus, many Wilders possess an innate understanding of the natural world and of living things. To a citizen of the farmlands and cities that constitute much of Esperia's kingdoms, even an average Wilder seems gifted in sensing subtle cues from the environment around them. Some among the forest folk, however, are especially gifted in one aspect or another. While one may read the clouds for hidden meaning or listen to the whispers of the wind, another will call on swarms of insects to do their bidding or see through the eyes of the birds flitting through the canopy.

Solise is one such gifted Wilder. She has become the preeminent botanist among her people through her advanced abilities with flowers and other things that bloom. With a touch, a taste, or a smell, she can understand fully the properties of a plant. Every petal and seed yields the entirety of its being to her careful gaze, and she misses nothing. This communication, however, works more often as a dialogue. Solise can speak to the green things of the woods in ways that very few could hope to understand. The plants she encounters invariably grow fast and strong, prime specimens in the forest that itself is Solise's garden.

Solise understands that life is cyclical. Death gives rise to new life, and as such she does not hesitate to use the growing things of the forest in her potent medicines. Where possible, a leaf or bud will be trimmed neatly off a healthy plant. When necessary, roots and stems will be harvested for other purposes, thus continuing the cycle. The concoctions stored in Solise's modest hut are seemingly innumerable, with something existing for every possible ailment, while some serve stranger purposes.

Her abilities don't end here, however. Solise can actually detect and manipulate the intangible life force that courses through every fiber of the plants and when needed, draw it out to manifest as a flower spirit. She has always tried to use this power sparingly, but now, as the blight of the hypogean invaders spreads, she is forced to take increasingly drastic measures to defend her home. Solise has sensed the destruction the demons have wreaked thus far, and she looks to correct it. When their corpses are left to decay on the forest floor, nourishing generations of growth to come, their debt will be repaid and the balance of the cycle restored. She intends to see this happen. 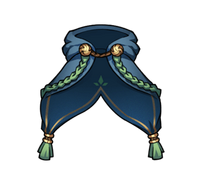 Woven together with a magical material, this cloak is more powerful than it appears. Wearing it allows one to forge a powerful connection with the forest’s flora. 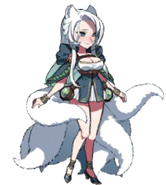 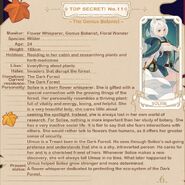 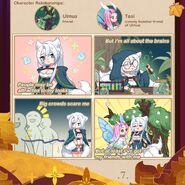