Skreg is a strength-based tank hero of the Mauler faction who is good at soaking up targeted ranged attacks and buffing his allies. This hero can keep melee heroes near him busy and force his way into the enemy's back line.

Skreg's ultimate ability "Beast of Burden" grants him immunity to knock-back and control effects. His normal attacks are able to deal double damage.

Skreg had dreamed of the wider world and the adventures to be had there since he was a youngling in the crowded warrens of the Durri. He was possessed, however, with the same timidity that characterizes the vast majority of his people. When his younger nest mate, Vurk, would wander too far beyond the entrances to their subterranean home, it was always Skreg who would turn back first. The outside felt so dangerous. So exposed. It was no place for a Durri, he would tell himself as he trudged back.

One day, after Skreg had returned to the warrens, he noticed that Vurk had been gone longer than usual. He searched throughout the twisting tunnels they had grown up in but saw no trace of his sibling. Possessing more compassion than the average Durri, he waited nervously by the various dark tunnel mouths for a sign of return, but after several days accepted that the hazards of the outside had finally gotten the best of the audacious little adventurer. He quietly went back to his regular life as one more component in the colony.

It was some months later when word reached the colony of Vurk's death-defying actions in the Arachin territories. He wasn't dead at all and rather had become a sort of instant folk hero. Skreg was relieved, but more than that he was inspired. He made the decision at that moment. If Vurk could survive out there, so could he. The time for fear was over. He gathered his meager belongings and set out into the strangeness of the open.

He learned as he made his way through the land and adapted quickly, recognizing the talents that the warrens and his people had bestowed upon him and utilizing them to their greatest effect. One day, when skirting around a grassy valley through the tree line, he saw one of the great beasts known as an iron-jaw laying bloodied and alone. He drew a thick hunting knife and approached the animal, intending to restock his supply of meat. As he got closer, he could hear labored breathing. The thing's injuries seemed to have been inflicted by others of its kind. Probably others within its own pack. Iron-jaws are omnivorous, but behave very aggressively when competing over a fresh kill.

Skreg circled the thing silently though from the way it shifted if had already detected his smell. He came around to its front, seeking a vulnerable spot to sink the knife. The thing stared at him, and he seemed to detect a kind of defiant fatalism in its fiery eyes. He stood transfixed for a moment and sheathed the knife without even taking note of his actions.

That defiant fatalism was, at the core, the same thing that had brought him out of the burrows. He wouldn’t kill this beast. He examined its injuries. They seemed surmountable. The thing was likely weak from lack of food. Even an iron-jaw can perish from small injuries if those injuries prevent it from hunting. Skreg began to scavenge and hunt incessantly, bringing back fresh and not-so-fresh kills for the beast to replenish its strength and applying mixtures of herbs to its wounds, which looked to be healing nicely.

One day, upon returning to the place where the iron-jaw rested, he was elated to find it finally standing. Its head was lowered in a defensive posture, and it swayed unsteadily. A short distance away a hunter crouched. It was a Latran, the cunning, vicious tribe of jackal-headed Maulers that roamed the rolling hills and lightly wooded prairies they were now in. It carried an assortment of weapons and moved with a wicked grace. There was no chance Skreg could defeat it, but he nonetheless found himself hefting his spear and charging forward, outraged that anyone would attempt harm on his ward. The Latran shifted, surprised, and knocked Skreg's spear aside a moment before contact. The tables of the fight turned almost immediately. Skreg desperately deflected a flurry of attacks more powerful than he had anticipated. Skreg directed his fighting retreat toward his new ally. A heavy overhand swing snapped the shaft of his spear, and he fell backward, nearly defenseless. The Latran leaped forward, weapon raised high to deliver a final killing blow, and the iron-jaw's head swung toward him like an avalanche. With a crunching sound and a yelp, the assailant flew a long ways before crashing to the ground in a heap and limping rapidly away. Skreg and the beast stood watching the retreat. Skreg placed his hand on the beast's head, and it gave a satisfied snort.

A cavalry spear crafted from the jaw of a demon lord. Inflicts wicked wounds.

To view the transcribed version of this guide, see Skreg/Usage Guide. 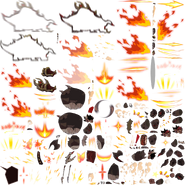