Silvina is an agility-based assassin hero of the Graveborn faction. She is useful in targeting specific enemies, as she will go after the enemy mage with the lowest defense rating and the enemy with the most energy. Silvina can withstand hits with her shield ability that mitigates damage.

Her ultimate ability "Fatal Strike" allows her to deal an opponent damage that halves their energy level.

Even in life, Silvina was surrounded by death. She was orphaned as an infant and thereafter kept alive only to be used as a tool, or rather, a weapon. Through extensive, cruel training, most of Silvina's humanity was stripped away by the time she was old enough to begin looking after herself through day to day life. At the age when most children are playing with dolls and wooden swords, Silvina had already killed. Though she was young, she was quick, agile, and precise. She had no distractions, since the only life she'd ever known was that of dealing death. None of those targets assigned to Silvina lived through their encounters with her. Sooner or later, they all felt her blade. That was, at least, until the last…

The widely admired Baron Rayne, father to General Estrilda Rayne, was Silvina's final target. She approached this assignment as usual, first with observation. She hid outside the castle of House Rayne. Day and night she watched from the shadows, memorizing the routines and habits of the watchmen, the knights and nobles, even the officials rushing to and from the castle on their various errands. After some time, she knew how things worked at Castle Rayne. Every couple of days, the baron would take his young daughter out riding, accompanied by only a token force of guards. This was her best chance to dispatch the decorated warrior and get away with her life. She knew that considering the baron's combat prowess and experience in the field, she'd need speed and surprise. There would be no second chances here, and the odds would only be in her favor for a bare moment after she revealed herself. Even so, she was not fearful or apprehensive. She knew her task, she knew how to accomplish it, and she knew how to extricate herself from the ensuing chaos.

When the baron arrived at the point of ambush, Silvina dropped silently from the dark boughs of a tree. She fell toward the rider with her knees bent at the perfect angle, ready to take the impact of the landing and execute a quick roll, knives out and held at the ready to strike. For the briefest instant, she allowed her focus to waver. She saw the girl she'd seen from afar, now close and made real. The girl's face hadn't even had time to register surprise. She had simply looked to Silvina, the dark shape falling from the tree, and the innocence in her eyes shook the assassin to the core. This girl was what she might have been. This was what had been taken from her. Still falling, she lashed out in a red fury, her stiletto glinting toward the baron's neck. The baron's reflexes were faster than his young daughter, and he had responded mechanically, no thought required. Her blade whisked a hair's breadth away from the jugular into thin air, and the baron's blade was drawn when her feet hit the ground. Rayne thrust, and Silvina felt a sudden sharp pressure in her leg, and felt the hot blood running across her skin. She bolted, just managing an escape into the underbrush.

She ran for quite some time, until the sounds of rage and pursuit had ceased entirely. By the time she felt safe, however, she was too faint to go on. She was lucky in that the undergrowth was thick enough to conceal the trail of blood she'd left, but all that blood had been too much for her slight frame to handle. As she settled to the forest floor, she could feel her pride and dignity leaving her with each crimson surge. Even as her life waned, her humiliation and shame grew. At her moment of death, there was nothing but resentment and unthinking spite left in her heart. This spite was so strong that the graveborn, skulking in a nearby barrow, could smell it in the scent of blood. When they reached her still-warm body and began preparing it for resurrection, they couldn't have known what a terrifyingly cold killer they were creating. With her lesson learned and any vestige of compassion lost, the new Silvina would become an avatar of death itself.

“Death comes to us all eventually. I just deliver it early.” 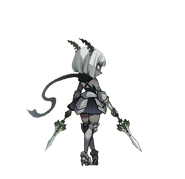