Shemira is a durable intelligence-based mage of the Graveborn faction who is famous for her high sustainability in the battlefield. She can efficiently heal herself and deal continuous damage, making her suitable for having the position of being the team carry. She also can apply a silence debuff on the opposing mage or support hero.

Helpful but incredibly pessimistic, even more so since dying.[1]

A soul forged in sorrow with nothing left to her in the world. This was Shemira in the final months of her life. Her husband had been a renowned healer, but her adoration and respect for him had gone out the window when she heard about the horrific acts of which he'd been accused. Her love soured such that when his execution came, she felt more anger than sadness. Niru had left her alone to care for their son in an uncaring world.

It wasn't long after Niru's execution that the fevers took hold on her boy, Daimon. Had Niru been present, Shemira was sure that he could've done something. She did everything she could, calling on all the best remaining physicians of Esperia and keeping vigil with silent prayers at the child's bedside. Her efforts, however, were not enough. After his burial, she felt as if she had nothing left to live for. There was no longer any reason to go about her days as she had before. She began spending almost every waking hour next to the grave of her son, sometimes filling the cemetery with a haunting wail, sometimes staring trancelike at the headstone for hours on end. She stopped taking food more often than not, and her face became hollow, her expression blank.

One day as she sat beside the grave, watching the last weak rays of sunlight kiss her son's name carved in the stone, she heard her name. She couldn't locate the source of the voice, but it seemed to be right next to her. She froze, recognizing the voice as that of her late husband. There was so much to say, so much to ask. Where could she begin? Exhaling slowly, she chose the one question that really mattered. “Why are you here?” She grimaced and tears flooded down her cheeks when she heard the answer. How could Daimon possibly be saved at this point? A glimmer of hope had been placed in front of her from nowhere. The thought that it might wink out terrified her more than anything. She didn't want to listen, but it was impossible. If there was somehow some chance, she would have to be strong enough to take it. “Prove it” she forced out from between gritted teeth.

The ground in front of her began to swell. She could feel tiny vibrations from the ground, as if something was disturbing the soil underneath the surface. First came a hand, rising through the dirt, then the pallid face and more until finally her son, or some form of him, stood before her. She struggled not to scream or pass out. A mix of awe, horror, and relief was pulling at each corner of her mind, threatening to tear it apart. She still knew what this meant for her, however. Direction. Purpose. She would never let any ill befall the boy again. She relayed this to Niru, who explained that the only way to be truly reunited was to cross through the veil of death and rejoin them on the other side.

She didn't hesitate. She gave Niru a simple, short command and felt a sharp coldness spread through her chest and into her limbs. She drifted into what felt like a heavy sleep, content in the reassuring presence of the ones she needed most. When she awakened, she had found a kind of happiness she never thought she'd feel again.

“Don't pretend to care about something you're not willing to die for.”

A cursed orb containing a trapped spirit. Inspires dread in those who look upon it.

How to use Shemira on the Battlefield

Your main goal when using Shemira is to pop off her Tortured Souls skill. By constantly damaging all enemies on the battlefield for 12 seconds, Shemira becomes one of the strongest solo-carries in the game. She can be used in battles at early levels, but her powerspike is when she reaches level 161. This is when the Tortured Souls skill restores 25% health while she is dealing damage and gives her enough sustain to deal damage until the skill finishes and it restores the rest of her health. The Tortured Souls ability can also stack, which means that she can have multiple Tortured Souls ongoing at the same time and deal double, triple, or even quadruple the damage, depending on how fast Shemira regens her energy. Energy regen is for that reason essential for any Shemira.

To utilize Shemira to her fullest, make sure that she is in the highest level possible before leveling up your other characters.

Shemira as a Frontliner

Shemira's prime objective is to gather energy quickly. The quickest way to gather energy is to put Shemira on the frontline so that she gathers energy points both from dealing and taking damage. On the other hand this makes Shemira more exposed to enemy damage, hence the clue will be to place her in front of the enemy frontline who deals the least fatal damage. In this scenario, Shemira utilizes well with support characters who have Crowd Control abilities. Heavy Crowd Control characters such as Fawkes, Tasi, Arden, Ferael and Nemora will help Shemira stay alive long enough to summon her Tortured Souls and kill of the enemy team. She also utilizes well with Energy Regen characters such as Estralda, Lyca and Ezizh to regen her energy faster and summon her Tortured Souls more quickly.

A good team composition with shemira as a frontliner can look like this:

Shemira as a Backliner

Shemira as a God of Death

A fun composition to play around Shemira is to synergize her with Raine and Rosalina. Once Shemira summons her first Tortured Souls, Rosalina will restore Shemira's energy which stacks the ability and doubles the damage. Once Raine has activated her cripple skill and you kill an enemy, Shemira will have 3 stacks of Tortured Souls going, and then the snowballing continues. 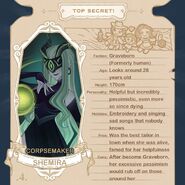 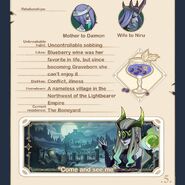