Savior of the Sea

"The ocean is my dominion."

Seirus is a strength-based warrior hero of the Wilders faction. He takes on a durable tank role which renders weak attacks against him even weaker. He offers crowd control effects, although his animations are naturally slow for them to be consistent.

Seirus' ultimate ability "Abhorrent Torrent" sends waves into his enemies to continuously knock them back and stun them.

Any well-traveled practitioner of magic in Esperia can tell you that the more remote a place is, the more magical energy it will possess. Far from the dampening effects of civilization, magic flows stronger and more freely. In these far-flung locales, from the Oromouth Highlands to the Scorched Expanse, strange creatures roam the stretches of wild. Born of the prevailing elements in their homes, they are a manifestation of that place's unconscious will.

Azure Cove is situated between the Dark Forest and the Bastion of the Elements. Its position relative to the ocean's currents means that this patch of water is fickle and fierce. Here, a tranquil sea mirroring the sky above can become a darkly churning maelstrom seemingly without reason or recourse. Decades ago, a massive tsunami swept through the cove, permanently altering the area's gestalt and birthing in its turmoil a new avatar. A new manifestation of this altered place.

Seirus is a son of sea and storm. He is the raging current and inevitable tide, the vast power of unseen forces. He naturally protects the area to which he is bound. Those who would pollute the cove condemn themselves to a frantic death beneath the waves if they come too close to its shores. Fishing boats risk disappearing into sudden whirlpools when they take more than the sea wants to give.

Much of Seirus' time is spent near the shore marking the seaward edge of the Dark Forest. He has developed a close relationship with the forest's inhabitants and now even thinks of himself as one of them. A Wilder of the waves and surf. The Wilders, in turn, consider him one of their own. After all, what is their realm but a terrestrial expansion of his? What among their goals and methods differ? They stand as one to form the insurmountable will of nature, of the very world itself.

“The tide shapes all things.”

A fearsome weapon with the power of crashing waves.

At the beginning of battles Seirus will cause his own max health to increase by 40%, however his current health after the increase will not be at maximum unless restored. 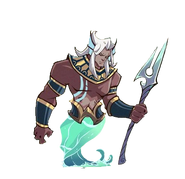 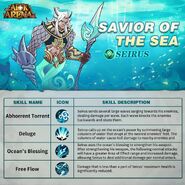