Saveas is an agility-based strong marksman of the Mauler faction capable of hitting enemies with raw damage. He can be a carry hero due to high damage and a high amount of sustained damage which he inflicts on the opposition.

Saveas' ultimate ability "Burning Acrimony" allows him to sacrifice his health for an attack boost.

For a hunter as competitive and motivated as Saveas, there were few things worse than living in the shadow of an older brother. He was convinced that the only thing elevating his sibling above him in the eyes of the clan was the advantage of years in the field, a simple accident of birth that would in time cease to matter. Time, however was never a friend to Saveas. Impatient, impulsive, and energetic, he had no desire to wait for things to simply take their course. That the greatest hunters typically possess notable reserves of both patience and awareness was something which escaped his notice, or perhaps something he simply chose to ignore. He knew he was the superior hunter. It was only a matter of going out and proving it.

He took on a task well beyond his skill level in order to decisively put the matter to rest. Pursuing a thresher claw through thick brush, he became disoriented. These animals were known to be as cunning as they were deadly, and he'd let it get out of sight. He continued at a run, following the torn ground and shredded shrubbery. He eventually found himself trudging through a putrid marsh, exhausted and out of his element. With each step, he was sucked knee-deep in stinking black muck, the acrid smell assaulting his eyes and lungs even as clouds of shimmering flies rose around him, obscuring his vision and greedily drinking the sweat pouring off his shoulders.

Saveas stopped, having almost forgotten the thresher claw entirely. He sluggishly waved a pack of insects away from his eyes and scanned his surroundings, looking for some means of egress from the marsh's grasp. His quarry watched, unseen. The hunter had become the hunted, and the beast sensed that now was the time to strike. It stalked out of the tangled growth, head and shoulders low to the ground but not attempting stealth. It knew when to expect a fight from its prey, and this wasn't one such time.

The trapped hunter raised his spear listlessly in the direction of the beast's approach, attempting to keep the point between it and himself. He knew that this was now a matter of life and death, but the exhaustion had taken its toll. The beast slipped forward, getting past the spearhead in a fluid maneuver Saveas didn't quite follow, and gave him a swipe. Whenever able, thresher claws preferred to toy with their prey. A series of red lines opened on the hunter's shoulder, exposing the fleshy crimson of torn muscle tissue. A jolt of awareness went through Saveas. He felt as he had hours earlier, energetic, just beginning the hunt, bloodthirsty.

The beast recoiled, sensing the change in its meal. Before he fully realized what he was doing, Saveas drew the tip of his spear down across his chest, opening a clean red line, blood flowing over his ribs as his breathing became heavy. He had never been so alive, so aware. In an instant he hurled the spear, catching the monster square in the throat. The weapon burst out through the back of the thresher claw's neck in a gory spray. It sounded a gurgling screech for a moment before collapsing with a fetid splash.

Since that day, before any fight, Saveas will lacerate what unscarred parts of his body remain. His limbs and torso are a crisscrossed network of scars, the ghosts of self-inflicted wounds. Many of his brothers in arms look upon this with some revulsion, or at least perplexity. He's never shared his secret with the others. Now that he has the recognition he's always sought, he's not about to hand it over to anyone else. He is a terror on the battlefield. Bloody before the fighting even starts and moving with a speed that defies belief, the pile of dead at his feet grow with each mark he adds to his form.

Later on in his life, he would be bestowed the wild slayer title, the greatest honorific a mauler hunter can receive as he came victorious accompanied by Numisu and Vurk in the Hall of the hunt. He was wielding a fang from the Bone glade's dragon, a legendary beast that had made many hunters its meals and destroyed encampments leaving deserted areas and trails of blood in its wake. Saveas had speared the dragon in the eye and killed it while Vurk was distracting it by shooting otherwise ineffective bolts at the beast's chest and throat as well as running around.

Unlike his younger self who was so eager to prove himself, Saveas was now modest enough to share the glory of his feat with Vurk and Numisu.

He wasn't living in his older brother's shadow anymore.

“Hunt or be hunted.” 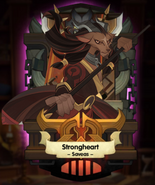