Daughter of the Desert

"I am one with the desert."

Safiya is an intelligence-based damage-dealing mage hero of the Mauler faction. She’s a fire mage capable of casting orbs that deal massive damage to enemies, and buffs allies as well as lowers enemy attack ratings if they stand in her enchantment circle.

Safiya is unique in that her ultimate ability "Falling Sun" can be charged up for maximal damage or cast early for minimal damage. Upon impact, it deals AoE damage.

The Sphinx are a naturally observant and analytical folk. Of all the Maulers, they enjoy perhaps the strongest abilities of foresight and planning. Often maligned as aloof schemers who eschew the typically blunt methods of most other Mauler tribes, the cunning cat people view words as simply another weapon in their arsenal.

Safiya wasn’t born into the highest echelons of her people, but with a few carefully calculated risks, she was able to begin the climb to power at a remarkably young age. A suggestion here, a leading question there, and her targets would fall one by one, never suspecting the designer of their downfall. Her masterful skills of manipulation were finally laid bare when she instigated a coup. The queen, regarded by many Sphinx as a kind and stable leader, seemed a naïve fool to the ambitious usurper. Safiya believed that her people were being led into decline, and if the Sphinx lost their influence among the Maulers, her own goals would become ever harder to accomplish.

Season after season she secretly converted others to her cause, meticulously selecting the most useful individuals from every strata of Sphinx society while continually working her way closer to the queen. Deals, gifts, and threats were delivered in secluded places with hushed tones. Her hidden army grew as their enemies squabbled amongst one another, oblivious to the treacherous undercurrents swirling just beneath them. She obsessively pursued the mastery of arcane magics, using her spells to ensure loyalty, obtain forgotten knowledge, and disrupt the queen’s operations.

When the time was right, Safiya ordered a vicious strike against the established order. The few advisors and high officials still loyal were killed in their sleep, their guards having already been won over one way or another by the underground opposition. When the queen was arrested and brought into the throne room, she was shocked to find Safiya lounging contentedly on her throne. All rulers try to keep an eye on those they believe might be threat, but Safiya was the last one she would have expected. The sentencing was swift, and there was no trial. A reproach, an order, and a summary execution. Before the break of dawn, the word was out. The Sphinx had a new queen.

It was an unpleasant surprise for Safiya when she discovered that ruling from a throne and taking a throne are two very different things. Her visions for her people weren’t shared by many of those very people, and resentment began to build. Though the old queen was cold in her grave, her memory persisted in the hearts and minds of Safiya’s subjects. After a brutal but failed attempt at crushing the rising tide of dissent, she was deposed, chased from her court ahead of an angry mob. Had she not become practiced in the magical arts of obfuscation, that night would have certainly ended in her death. She fled her home, accompanied by a handful of devotees, leaving behind several of her operatives and advisors to meet their violent ends.

Despite being forcibly exiled to a new land and having all that she had worked for torn away from her, she wasted no time in commencing planning to retake what she had lost. Only this time, she would take that and more.

A large scepter with a radiant design symbolizing absolute power.

1% of Safiya’s total damage output is converted into her attack rating. The attack rating can be increased up to a total of 140% 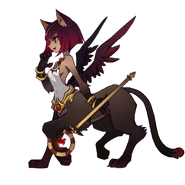 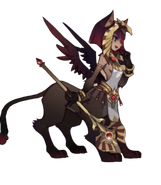 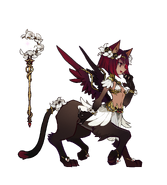