Rowan is an intelligence-based support hero of the Lightbearer faction. He utilizes his pet duck in battle to attack enemies, keeps a supply of potions to heal allies, and converts his health damage to energy damage.

Rowan's ultimate ability "Dazzle" scatters coins on the battlefield to both stun enemies and heal allies.

Rowan showed great business prowess from a very young age, and could thus appear more sophisticated than his peers. He has been supporting his father in managing the family business since very early on. He has the curiosity and energy of a young lad, and the knowledge and mind of a grown-up.

Men of the Reginald house are born to be free spirits and Rowan is no exception. He hates to be restricted by rules and doctrines. He thinks outside of the box, looks at the big picture, and acts decisively. His fleeing from the arranged marriage is nothing personal against Peggy. He simply doesn't want anything to stand between him and his ambition of establishing a grand business empire.[2]

Rowan is the second son of Esperia’s youngest and possibly wealthiest noble house. The Patriarch, Reginald, is his father, but he wasn’t born into money. Beginning adulthood as a small trader, his business acumen proved uncanny to say the least. Where he had started as a young man with a case of simple goods, he is now a lord with titles, businesses, banks, and vast mining operations under his purview. Though normally a title and lands would only be awarded in recognition of some great deed, House Gilder have essentially bought their way into the aristocracy. Lords and Kings fight wars, and wars are expensive indeed. Reginald Gilder’s timely gifts and loans curried a great deal of favor among the older houses, and he, in turn, was rightly rewarded.

Rowan and his older brother Angelo, despite growing up around unimaginable wealth, were nonetheless raised by their lowborn father to be self-sufficient and savvy in their dealings. Wealth could be gained, but also lost and if lost, it would need to be regained. No amount of swordsmanship or battle strategy could buy what hundreds of shrewd deals had afforded the family. Angelo, being the old est, felt the weight of responsibility on his shoulders from an early age. The heir to a new house with much to prove, he was expected to maintain and increase the Gilder’s wealth and influence, and of course to marry strategically to this end.

The pressure of his new position, however, proved too much, and he abandoned his family home to pursue his true passion. Though this was all well and good for Angelo, it placed a large and unexpected burden on the young Rowan.

Within a few scant weeks of his brother's clandestine departure, Rowan was already named heir to the house and arranged to marry the youngest daughter of the king. For someone of such common lineage to marry into the royal family was unheard of, and Lord Gilder was understandably elated. As a symbol of the role he was to take on, he was gifted one of the single rarest and most expensive items that could be found anywhere in the world-a fortune duck, which had the ability to lay golden eggs. The only problem was that, in his years of educating the boys to be independent and self-sufficient, Lord Gilder had done perhaps too good a job.

Rowan thought of his future with the princess. It would be a life of great comfort, lived in a series of palaces and punctuated by holiday festivals and business acquisitions. He would eat the finest foods and never be contradicted. Armies of servants and sycophants would vie for his attention. He would never struggle. He would never be challenged. He would never get the real measure of himself. Thus, it was settled. Rowan would do as his brother before him and embark on his own path.

Late one night, he pilfered the castle workshop for a handful of essential items, grabbing only the simplest garb and gear. It wouldn't do to wander the realm dressed as a nobleman's son, after all. Leaving a note on the workbench to apologize for the stolen goods and to assure the craftsmen they’d be quickly reimbursed, he set out to make his own fortune. After all, hadn’t this father done just the same, if not at as early an age? He would have one major advantage, however. The duck was coming with him.

Rowan had planned his escape carefully, and the searches over the next week turned up nothing. Though the young Princess Peggy bristled at the perceived slight, Lord Gilder looked on the events with a sort of bemused acceptance. His son may have insulted the monarch himself, possibly even earning the perpetual ire of the princess, but he had done something far more commendable than what had been asked of him. He thought of his own time on the road and smiled. Somewhere far away, Rowan hoisted his bag and walked one step closer to the destiny he would create for himself.

"Home is wherever your feet touch the ground."

A bell that seems to bring good fortune with its cheerful ring.

After entering the battle Rowan will set up a stall that now includes an energy potion. When an ally’s energy is above 600 points they will drink a potion, replenishing 60 energy points. The energy potion will be replenished each time the stall is set up. 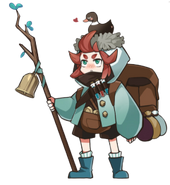 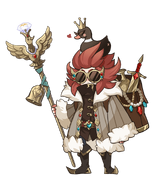 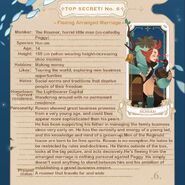 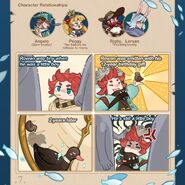 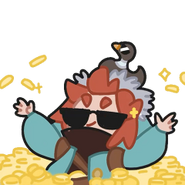 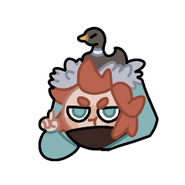 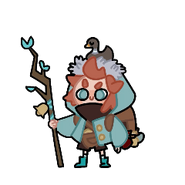 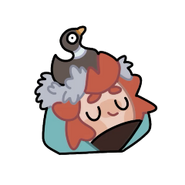