Rigby is a strength-based warrior hero of the Lightbearer faction. He utilizes alcohol to procure a fire breath, drinks himself into a state that negates the damage he receives and raises his haste, and regains health after enjoying a drink.

Ask anyone in the capital where to go for a good flagon of ale and you're likely to receive the same response- The Noble Tavern. This watering hole has been standing in the same spot for as long as anyone can recall, serving relaxation and refreshment by the cupful. The aromas of baked bread and succulent hot pies waft through the alleyways around the establishment, drawing patrons into the warm, welcoming interior at all hours.

The owner, Brewmaster Rigby Brown, is well regarded by the community but seldom seen in his own business. More often than not it's his daughter, Dolly, who will be seen greeting old customers and relaying commands to the kitchen staff. The brewmaster is usually away, traveling to different corners of the realm to seek out and sample new ingredients for his famous draughts.

Many of the Noble's regular patrons say that Rigby is like a shot of dragon rum. Warm, but with a strong bite. Though he possesses a kindly soul, Rigby has a penchant for troublemaking after a few drinks. It's more than once that he's awakened on the street outside his own tavern with a fresh black eye. The brewmaster isn't one to hold a grudge over something so petty, however, so he always has a pint ready for those he calls his "sparring partners".

The three things the burly brewmaster says he can't live without are brewing, eating, and drinking, with brewing taking pride of place among them. He goes to incredible lengths to acquire and experiment with new ingredients, and indeed sometimes his life resembles that of an adventurer, explorer, or thief than that of a brewmaster and business owner. His beard is often unkempt, his arms covered in scratches, and his face red from the sun and wind. In his never ending search for exotic concoctions, he has scaled cliff faces to find rare flowers for his recipes, wrestled Mauler warriors for a skin of their fiery tonics, and once even collected vials of saliva from a sleeping dragon. Anything to create something exciting, delicious, and most importantly, potent. There is nowhere Rigby isn't willing to trespass to find the next perfect ingredient.

"I'll tell you when I've had enough!" 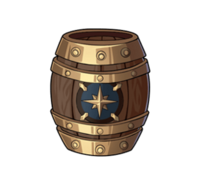 Crafted out of sawtooth oak from the dark forest, this barrel possesses unique magical attributes that makes its contents all the more tasty.

Rigby’s 'Fire Breath’ ability will trigger an additional explosion on enemies currently set alight by the ability 'Barrel Bomb’, resulting in 200% damage being dealt to them. 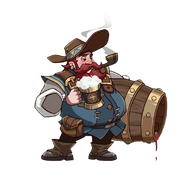