Ranhorn City is the ancestral home of the Lightbearers and one of the main places to go to in the interface of AFK Arena. It is available to the player at the end of the tutorial.

The library is a building that represents a typical school library. It can be unlocked after completing 2-16. Players can form unions of acquired heroes from themselves, their friends, or their guild mates. Players can also use The Elder Tree when completing stage 8-40 to increase attributes of heroes and can level up branches using Twisted Essence after completing Chapter 12 and reaching Level 15 of the Elder Tree. After beating stage 11-40, players can fill in constellations in Field of Stars to acquire many bonuses.

The Oak Inn (formerly known as The Whale Inn)

The Oak Inn resembling a floating whale ship that can be unlocked after completing Chapter 4 in the campaign, with full access once a player completes Chapter 17 of the campaign and has at least one ascended hero. Players can accumulate furniture, which will give their heroes new abilities and increased stats. Players can also collect gifts from friends and guild members that are already occupying their own Oak Inn.

The Temple of Ascension has a building of a church that can be unlocked after completing the tutorial. Players can ascend heroes with the same copies in order to increase the rarity and its health and strength.

The Resonating Crystal resembles a Dura crystal statue that can be unlocked after completing Stage 4-36. Players will have the top five heroes on the Pentagram in which the following heroes are leveled up by being put in the slot while the fifth hero is being leveled at the same time.

The Noble Tavern has a building of a typical café that can be unlocked after completing the tutorial. Players mainly summon heroes using normal scrolls, faction scrolls, companion points, and diamonds (if necessary).

The Wall of Legends resembles two tall pillar walls decorated similarly to a castle and is available after Stage 4-36. Although there isn't anything to do in this, players can collect diamonds after the first person has reached a milestone in either completing a chapter in the Campaign, a certain floor in King's Tower, or a certain number in the four main factions (not including additional ones).

The Store has a building that looks similar to a village house and is unlockable after Stage 2-8. Players can buy certain items using gold, diamonds, barrack coins, guild coins, labyrinth coins, and challenger coins.

The Rickety Cart resembles an old brown wagon. It is unlockable after completing the tutorial. Players can either retire common heroes, revert heroes, replace heroes, or reset heroes to level 1. 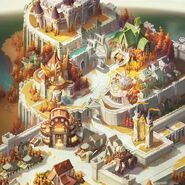