Raine is an agility-based support hero of the Lightbearer faction who highlights a sustained damage to her enemies while also giving her allies beneficial effects, such as rendering enemies to take more damage from the allied team as well as aiming for kills gives them bonuses like energy regeneration.

Raine's ultimate ability "Cripple" marks enemies with a bounty symbol, increasing the damage dealt against them. Killing an enemy inflicted with this symbol will regenerate health for Raine and her allies.

The young Raine was a daring, free-spirited girl who feared nothing. She was always curious and could be overly confident. Her next-door neighbor Fawkes was like a younger brother to her, whom under the influence of Raine was also curious. As Fawkes was younger and seemed feeble, Raine always brought him along as if she was his protector. Raine, together with Fawkes, even ventured into the deep forest which other kids feared.

Raine's complacency was exploited by a necromancer. Fawkes, a skinny and gentle boy with a natural connection with spirits, was the perfect sacrifice for this dark power. Fawkes was captured and imprisoned, and was soon to be killed as an offering. Raine was desperate, yet her hands were tied and she could do nothing but watch on. Fortunately, a demon hunter interrupted the ritual and the two kids were spared. Yet Fawkes was irreversibly scarred by the incident both physically and mentally. Raine could never forgive herself for that.

After the incident, Raine became more aggressive and violent. Fawkes was still close by her side, yet he no longer needed her protection. Troubled by overwhelming guilt and regret, Raine resorted to the killing of demons to soothe her emotions. The encounter with the necromancer turned Raine strongly against all mages, that was, until she met Mirael. This fair-skinned witch who seemed fragile turned out to be the complete opposite of what her appearance suggested. Mirael was powerful, passionate, and full of character. Her flame-like passion piqued Raine's interest in her. The arrival of Mirael sparked new chemistry into the Raine and Fawkes duo. A triangle is more stable, is it not?[2]

Raine has brought death to thousands of demons over the years, and she has the scars to prove it. The scene she leaves behind after a hunt is distinctive. Demons lay in pieces or riddled with gunshot. The sharp stench of black powder hangs heavy in the air and dark oily blood paints the walls and collects into grizzly rivulets. The walls and furnishings are shattered and chipped, blast marks illustrating the trajectory of the shower of lead characterizing Raine's methods.

Though she is a picture of cold stoicism, Raine's conscience is in constant pain. When she was just a child, she ventured deep into the forest with her best friend, a boy named Fawkes. Upon finding a cavern, they ignored their better instincts and went inside, ending up trapped in a necromancer's den, intended as a sacrifice to some dark power. Though she and her companion managed to escape with their lives, her beloved companion was infected with a demonic parasite. To this day she can see the toll it takes on him. She sees the exhaustion in his eyes from years of sleepless nights, spent fighting the parasite tooth and nail. She knows the pain that gnaws away at his psyche. His tired eyes are a constant reminder of the misery that her best friend has to live with, and of her own failure to prevent it.

Despite Fawkes' apparent mastery over the entity, Raine still worries that it will one day overpower him. It is patient and persistent, and at the end of the day Fawkes is only a man. This is why it is Raine's paramount priority to hunt down the necromancer that hurt her friend all those years ago and who still walks the land. This is the only way to afford respite for her companion, the only chance at allowing him to finally know a normal life.

“If you can see me, you're already dead.”

A pair of reliable old blasters. Good for getting into and out of sticky situations.

Raine teams up with the ally with the highest Combat Rating, allowing for them to recover Health and Energy every 2 seconds. The recovery amount is equal of 30% of what Raine recovers over these 2 seconds. 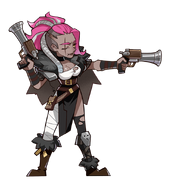 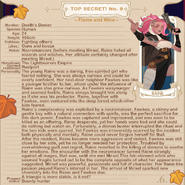 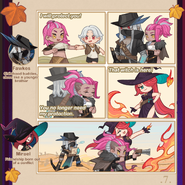 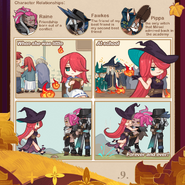