"I will tell you a tale like none you have ever heard!"

Prince of Persia, or, arguably, Dastan, is an agility-based ranger hero of the Dimensional faction who specializes in dealing high damage to enemy heroes. He also possesses a cheat-death ability as well as many skills boosting his survivability and mobility, making him a formidable assassin.

In the influential and prosperous Persian Empire was a noble Prince. He was a courageous and talented fighter, well-versed in the art of combat and responsible for many of the Persian Empire’s military successes. His success caused him to grow increasingly arrogant, spurring on unfortunate events he never could’ve foreseen, which changed his fate forever. This mistake cost his father’s life; it was a mistake that could never be undone.

Desperate to rectify his grave mistake and change fate, the Prince used forbidden powers to reverse the flow of time and change the outcome of events. Despite being able to prevent the initial disaster,

the balance of time was now disturbed, and a curse befell the Prince. From this moment on, he would be pursued by the Guardian of Time, Dahaka.

Despite this, as if it were his own shadow, the curse continued to haunt the Prince. The words of the blind old Mystic linger in his mind: “You cannot change your fate…”

The Prince would not compromise with the cruel fate he’d been dealt. He’d heard of another dimension, a place a great distance away. This place was said to contain a powerful being, one that was capable of bending time to its will. The

Prince set out on the long journey, hoping that when he arrived, he could finally extricate himself from the curse that follows him.

“Most people think time is like a river that flows swift and sure in one direction, but I have seen the face of time and I can tell you they are wrong. Time is an ocean in a storm.”

For more information on Prince of Persia, click here. 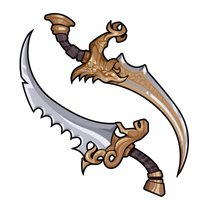 Sand flows and swirls around the hilt of this mysterious dagger, enabling the wielder to control time, reversing the flow. However, if misused, it will lead to great disaster. 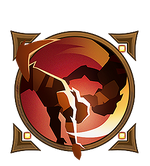 In between abilities and attacks, Prince will attempt to adjust his position by rolling or somersaulting backwards in order to meet the conditions needed to activate his “Tempest of Agony” and “Wall Dive Attack” abilities. During these actions, Prince’s Dodge is raised by 100 points, and once the actions have finished, Prince’s Attack Rating will be increased by 20% for 3 seconds. 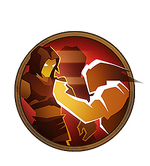 The Prince of Persia Arrives in Esperia! - AFK Arena