Dark Forest and the Astral Academy

Pippa is an intelligence-based mage hero of the Wilder faction added in patch 1.50. Her skills have many random effects along with a small chance to fail. Her main role is continuous damage with elements of control.

Pippa is also the main character of the Forest Mania mini-game.

A naturally gifted, but perpetually bamboozled, genius of the occult arts. She understands magic in a way most people cannot, bending it to her will and raising the eyebrows of those who watch her do so. She enjoys a life unrestrained, and her happiest memories are those of her days spent with Raku. She is blissfully ignorant of what goes on in the world, happily residing in her own bubble, curious about all the as yet unknown magic of the world.[1]

The Astral Academy is the premier Lightbearer institute of magics, and as such, it is one of precious few educational institutes that works co-operatively on its magical studies with the Wilders. The Lightbearer mages are proficient in astral magic and runes, whilst the Wilders excel in natural magic, ensuring every angle is covered. The reclusive Wilders are relatively lowkey in their joint projects owing to their isolationist tendencies, opting for periodic student exchanges.

The Astral Academy has a very old-fashioned approach, reigning in those students who stand out from the crowd, are too loud or act rebellious. Even exceptionally talented students aren’t safe, such as a certain strong, independent, fire-loving witch who was expelled.

Most Wilders who attend the Astral Academy as exchange students quickly adapt to their new environment, but Pippa is the exception.

Knucklehead, Bungler, Harbinger of Destruction… Pippa, the only exchange student to have ever been returned to the Wilders, is known by all of these and more. Hearing the reasons for these monikers, it’s difficult to know whether to laugh or cry.

Those around her see a maelstrom of confusion that enjoys meddling with bizarre magic, but such magics are accompanied by a degree of uncertainty… The outcomes of her meddling often ended in a riotous mess, making the stiff Astral Academy teachers foam at the mouth with rage.

Owing to her regular magical mishaps, there's a lot of whispering behind her back about how entirely unsuitable to the study of magic she is. In actuality, they’re all wrong. Pippa is one-in-a-million magician prodigy. Most mages barely make headway in their individual fields, yet Pippa is a strong all-rounder capable of learning a spell just by seeing it cast. How she does this is a mystery even to her, but suffice to say, she’s a fast learner (although the process of that learning isn’t without its risks!)

Geniuses are almost always completely different to the average person. Pippa's uniqueness makes her get lost in her own little world, caught up in her own way of thinking; it's impossible to tell what's going through her squirrelly mind. One time, a teacher asked her why she wanted to learn a teleportation spell, to which she blurted out, "It'd be way more convenient for stashing acorns!" The professor grimaced and groaned whilst her classmates howled with laughter.

Despite being cast out of the Academy and sent back to the forest, Pippa felt liberated. The forest is a free and tolerant realm, teeming with cute friends. The kindly old goat, the amiable sheep, brilliantly colorful butterflies… Oh! And not forgetting Raku, who revels in making trouble for Pippa. They're way more fun than those stiff old Academy professors!

"Pippa? Oh! I remember now! The kid that always turned the class upside down! I have to say, she's a total genius!" – Mirael 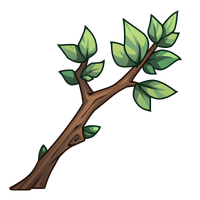 A verdant branch plucked from an ancient and arcane tree, located deep within the heartlands of Wilder territories. Only those whose veins course with the forest’s blood may wield it. 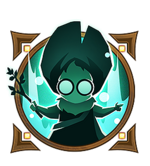 Every time Pippa fires a magic orb, she has a 40% chance to fire an additional magic orb at a different random enemy target while using the ability “Pippa’s Pandemonium”. 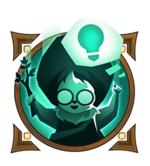 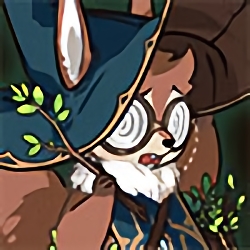 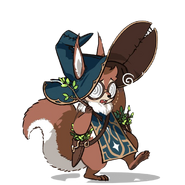 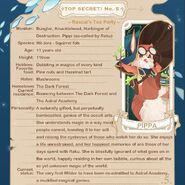 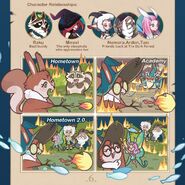 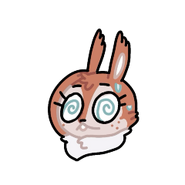 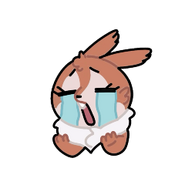 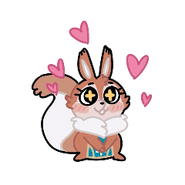 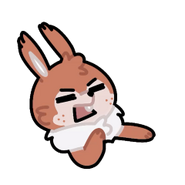