Oscar is an agility-based ranger hero of the Lightbearer faction. He excels at knife combat, able to target and subsequently throw knives at enemies. Additionally, he can remove the majority of de-buffs applied to him.

With Oscar's ultimate skill "Aura of Haste", he constructs a magical aura that deals AoE damage to nearby enemies while simultaneously granting him increased haste.

Oscar is the house steward for the most powerful noblewoman in all of Oakenfell. He manages her holdings with care, overseeing the army of under servants in her employ, keeping track of goods, finances, the dispensation of pay, and a thousand other responsibilities in the upkeep of the estate. It is he who orchestrates the many duties of staff and keeps the property productive and running smoothly. Oscar executes his work with precision and an attention to detail rarely found among even the best-trained personnel. Though a house steward is often viewed as an imposing and aloof figure among the servants working under him, Oscar's easy charm and respectful manner toward people from every level of the social hierarchy make him a beloved figure in his lady's domain. Everyone from scullery maids to nobility are treated as worthwhile individuals, and his kindness does not go unappreciated.

Oscar's past, however, is far from what any in the household would expect. He was, at a time, somewhat famous among the upper echelons of society, though no-one, save his master could match his face with the epithet with which he had been branded.

The Mannered Knife was viewed with notoriety (and perhaps a bit of roguish admiration) among the nobility. The killer didn't strike often, but when he did it would inevitably cause a stir and raise a flurry of gossip from the circles outside the bereaved. The odd moniker was chosen because unlike most assassins, who gave their targets a crude end with poisons, crossbow bolts, or swords in the dark, this mysterious figure would arrange kills with such restrained subtlety that the assassination would often go unnoticed for hours.

In one instance that exemplified the killer 's skill and style, a nobleman who had crossed Oscar's master was found dead at a masquerade. The night had begun as normal- a sumptuous feast followed by chatter and revelry. This particular nobleman was well known and influential and had no shortage of partygoers eager to make his acquaintance or engage him in conversation. Winded from drink and dance, the nobleman took rest in the sitting room to enjoy a pipe and spirited discussion. At some point, and none present could say exactly when, he went quiet. It seemed that he had drifted off to a heavy sleep, nestled among the plush seating but retaining a genteel and dignified posture. It was only as the masquerade was wrapping up and a servant attempted to wake him that it was discovered that he had been dead for the entire latter half of the celebration, his body already cold to the touch. A small puncture wound marked a spot on the back of his neck. The party had continued around his body for hours with no one noticing what had transpired. The only additional blemish was an intersecting of two shallow lacerations the wound- the mark of The Mannered Knife.

It was to Oscar's great misfortune that the investigation proved too intensive for his employer. In his master's panic, he was sold out and disavowed, the one who had ordered the execution stating that the overzealous Oscar had taken the rivalry between he and the deceased as a personal slight and had chosen independently to carry out the killing as a matter of personal honor.

In the following weeks, Oscar narrowly avoided capture again and again, always a half-step ahead of his pursuers. Eventually, in disguise, he made his way to faraway Oakenfell and the search was in time abandoned. Here he took the name by which he is now known and entered service in the house where he is currently employed. 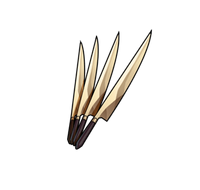 A beautifully crafted, yet deadly knife that is as sophisticated as its owner. Able to slice through all types of meat with ease, few people are worthy of owning such a tool. 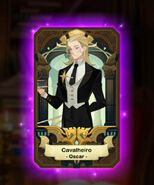