Ogi is a strength-based tank fighter of the Wilder faction, both durable and high damage for its position. He can throw enemies away from the allied team, allowing the enemies to be compressed together.

His ultimate skill "Resilience" grants him a shield that mitigates damage.

Wilders come in all shapes and sizes, but some are more unusual than others. Ogi happens to be one of the unusual-looking ones. Though Wilders don't have any expectations of exactly how another Wilder should look, most of them don't expect Ogi. Ogi's lineage is part giant, and his size alone makes him hard to miss as he lumbers about between the trees. The attention and stares always made him uncomfortable. He felt shame and sorrow every time his towering frame caused a child to burst out in tears. Seeing the fear in the eyes of the others when he would rumble into a village gave him a stabbing guilt. He hated seeing the other Wilders point and whisper when he was around them, so he retreated to the edges of the forest far from Yggdrasil.

He lives in a small cottage he haphazardly pieced together from fallen trees and branches. It appears he is alone, but he is actually rich in friends. Ogi much prefers the company of the small creatures of the forest. Birds flit through his small window to alight on his shoulders and head, chirping merrily as he offers them seeds and berries. Mice dart around his feet, stopping to give brief squeaks of contentment. His pockets and bags contain not keys and coin, but squirrel nests and mushrooms. His lifestyle illustrates a cruel irony: the massive beast the other Wilders so feared is in fact one of the gentlest souls in the woods. A result of his unusual choice of friends is that his already unimpressive speaking abilities have been even further reduced, and he now knows only the simplest phrases and vocabulary. Despite being notably inarticulate, Ogi possesses a calm wisdom that has served him well throughout his years alone.

When the Hypogeans broke through the gate, countless friends of Ogi, from the largest deer to the smallest shrew, lost their homes. This is too much an affront even for the most even-tempered giant, and Ogi has resolved to fight and protect what he loves. He is a terrifying foe. On the rare occasion that his anger gets the best of him, it is a raging torrent, so destructive it's like a force of nature. His skin is as hard as the oldest oak, and he doesn't feel the tiny scratches made on his trunk-like arms as the enemy ruin their blades in desperate swings and thrusts. Ogi's path is changing. What was once a road of peace and tranquility will become a road soaked in blood, and paved in broken bones.

All that being said, he is still but one Wilder. Even one with his strength cannot face an army alone. Ogi will put aside his misgivings and seek out those who will fight alongside him, to give the forest and its residents a chance. 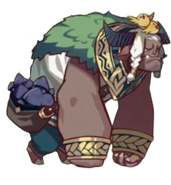 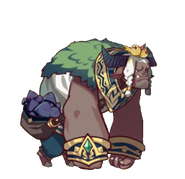