Oden is an intelligence-based mage of the Graveborn faction. He specializes in summoning portals, able to summon lightning from them to deal AoE damage, as well as trap the strongest enemy on the battlefield inside to subsequently launch them into the weakest enemy. As he recovers energy points, each of his eyes will open, granting his abilities additional bonuses.

Oden's ultimate skill "Soul Burn" completely drains all energy from the enemy that possesses the highest amount of energy, dealing 160% base damage to them. The higher the amount of energy that Oden drains from his enemies will result in Oden losing a higher proportion of his own energy.

Few mortals have ever been seen again after passing the boundaries of the kingdom of Bantus. This shadowed realm is one of mystery and dread for Esperia's living, and only the most foolhardy adventurer would attempt to come here. What Bantus is to the living, the Mortuary Void is to the wandering spirits that drift throughout the gloom of the old kingdom. This is a place that even the dead fear.

Oden was once counted among the preeminent mages of the Temple of Light. His brilliance was widely admired, and several among the order saw him as an inspiration and role model. Thus, it was with great surprise that he was discovered to be secretly immersed in the forbidden studies of necromancy. Though he argued his case fervently, claiming that a true mage should have an intimate knowledge of all magical disciplines, there was but one possible sentence for his transgressions. Under the blazing sun, in the full light of day, Oden met the executioner's blade.

It was perhaps an oversight on the side of the Temple that allowed Oden's spirit to flee his body upon death to an unholy contraption imbued with dark energies. By the time of his execution, he had amassed enough knowledge of the necromantic arts to assure the endurance of his consciousness even after decapitation. This device had been hidden far from the reach of the Temple, in a secret place near the Mortuary Void, under the ruins of the old Academy of Night.

News of his execution quickly reached Bantus, and a group hoping to rebuild the Academy were dispatched to retrieve his body. Upon bringing it back to Bantus, they performed rituals to raise the corpse and join the ranks of the Graveborn. The rituals seemed at first to hardly be a success. The body of Oden seemed lacking in any of its old abilities, being sluggish and barely sentient. Upon rising, it simply shambled away. The disciples followed, hoping to discover what the body sought. It brought them to a strange device they recognized as a sort of receptacle for souls. As the disciples watched with bated breath, the corpse placed the receptacle upon its severed neck. The eyes carved into the receptacle flickered to life. Oden was whole again, and their fate was sealed.

Oden's body had been clumsily reanimated by the novice necromancers, but the consciousness that now again had a vehicle for its will was preserved by him alone. No longer owing allegiance to any faction, he laid waste to the foolish initiates, capturing their souls even as their bodies were destroyed by his furious spells. The souls were dragged to the Mortuary Void, and cast howling into the eternal nothing. It is now said among the halls of the rebuilt Academy of Night that Oden, the Void Keeper, still stalks the massive network of catacombs under the Academy grounds, seeking souls to feed his only master. 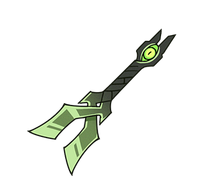 The key to the void. This unearthly object is capable of opening doors to the dark, unknown planes of existence.

During battles, Oden gains one Fiend Point required for his "Eye of Evil" ability from every Energy Point taken away from his enemies.

To view the transcribed version of this guide, see Oden/Usage Guide. 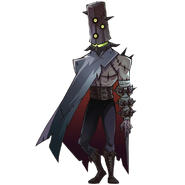