"What do you need to know?"

Numisu is an intelligence-based support hero of the mauler faction. Donning the role of Regen, Numisu is adept at keeping his enemies busy while supporting his own allies through healing with the use of summoned totems.

He is a dangerous foe if his totems start to spawn faster than they are removed, for his ultimate skill "Voodoo Blessing" heals 2 allies whilst simultaneously dealing AoE damage to enemies near the healing allies.

Voodoo is often misconceived as a strange, dark magic practiced by zealots in the worship of ancient evils. Many other faiths would portray voodoo as nothing more than a tool for evil men to rule over the weak through trickery and fear. The practice of ritual sacrifice made for an easy target when other belief systems sought to discredit voodoo, lambasting it as a barbaric faith followed only by savages and madmen. They ignored the facts and failed to see the magic for what it really is: an ideal channel for communicating with the spirits, in perfect accordance with the laws of nature.

What many would call a “witch doctor”, the Maulers know simply as “wise one”. Not only are these so-called witch doctors able to heal the wounded, they also have the ability to communicate with the souls of the ancients. This is an invaluable skill, for when the Maulers prepare for battle, they will invariably seek the blessings of the ancients. It is believed that this bestows strength and protection on the warriors about to risk life and limb.

Of course, not just anyone can become a witch doctor. Every one of them spends many years of intensive study of their history and their mountains of secret knowledge. In times of strife, their presence and work is crucial. No Mauler army would be at optimum morale without the guidance of a witch doctor.

As a young boy, Numisu would follow the witch doctors everywhere, soaking up all the knowledge they could offer. Although he was very diligent in repeating the chants and performing the rites, he seemed to lack the spark. Despite his continued efforts, there was never a hint of an answer from the voices on the other side. The elders assured him that these things took time, but he saw the doubt in their eyes as they attempted to allay his fears. The few peers he knew on the same path were becoming attuned to the spirit world, their powers growing slowly but steadily. Meanwhile he stagnated, trying in vain for a sign.

It was when he was about to forsake his chosen path that a horrifying plague began ravaging the tribe. Though he was only an apprentice, it was still among his responsibilities to help tend to the sick. He did everything he could within his very limited abilities, and unsurprisingly accomplished very little. That being said, even the witch doctors themselves were hardly making an impact. The plague was so virulent that their magics had little effect, usually serving only to slow the plague's onset or to ease the passing of its victims.

Before long, Numisu also began to suffer the plague's effects. He was bedridden, and on death's door. He felt his spirit begin to slip away from his body. His vision blurred and darkened and the voices of the people around him became first fuzzy, then quiet. After an indeterminate amount of time, other voices began to whisper to him. These were strangely clear. He listened intently. The voices had much to say.

Numisu felt his body warm with the return of his spirit. The spark he had sought now smoldered perceivably in his heart. A vigor unlike any he'd ever felt danced in his limbs. He saw with clarity, but felt as though he was walking through two worlds at once. The voices had given him a task, and he would accomplish it. He began striding through his disease-stricken village, chanting under his breath. Within days, the plague had been fully banished. The task, however, was still far from complete.

“The ancients speak to me.”

A mask that acts as a window to another world. 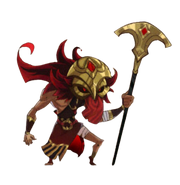 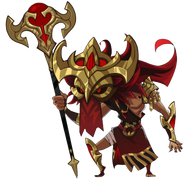