Nemora is an intelligence-based support hero of the Wilders faction who can heal her team. She also has a regeneration skill which is cast upon an ally who has the lowest health. Her charm debuff turns enemies against their own allies.

Nemora's ultimate ability "Wild Wonder" allies her with the forces of nature in order to heal her teammates, the amount of HP recovered being dependent on a percentage of her own max health.

Nemora is able to tap into the forest's forces of regeneration and life, which makes her the best healer among the Wilders. She is kind and beneficent by nature, and can't bear to see any living thing harmed or suffering. Rather than viewing her work as an occupation, she sees it as the manifestation of her will. She was born to do this.

A quick learner with great natural talent, she was the most outstanding among those of old Arden's students. Through her powers of observation, desire to always understand more about the world around her, and affinity for all natural life, she was able to unearth many of the secrets hidden in the lush green of her homeland.

It was during a still, quiet night that she saw the will o' the wisp. She had been in one of her deep, trance-like sojourns, communing with the life surrounding her that her meditation was interrupted by a softly glowing orb floating and bobbing between the trees. She followed it to an almost unsettling tranquil grove she'd never seen before. When the sun rose, hours later, the wisp was gone. She couldn't remember seeing it leave, and the grove now seemed to have lost its mystery, but she felt a new power surging through her limbs. There was a vigor in her heart she'd never known before.

It wasn't long after that the Hypogean menace found their way to the home of the Wilders, and from that point it didn't take long for her to realize the potential of the abilities that had been conferred to her that night in the grove. Her skills were no longer solely within the realm of healing. She found the power to mesmerize those who would do harm, incapacitating them without injury. She could also cause her newfound enemies to turn on one another in a blind fury, keeping several of her comrades safely out of the fray and eliminating that which threatened them in one fell swoop.

The numbers of the Hypogeans were such that the Green Guard were forced to call upon all able-bodied Wilders to take up arms if they were to ensure the survival of their people. This ruthless conflict brought unprecedented carnage to the Wilders, and after each battle there were countless casualties. Many of those who survived had to be carried back to their homes. Nemora worked tirelessly with the injured, first mending their horrific wounds, and later consoling those who suffered emotional trauma from what they'd witnessed and experienced.

Although Nemora is a picture of kindness and compassion, she extends her benevolence only toward those who deserve it. If a spear through the heart of another Hypogean prevents injury to a Wilder, she won't hesitate to thrust it herself. She will never give up on an ally, will never have any qualms about extinguishing life hostile to the well-being of others, and will never allow this peril to overrun the land and people she loves.

“The forest brims with life, it runs through my veins.”

A sharp spear that can cast natural magic. Ideal for any defender of the forest.

Normal attacks heal Nemora’s weakest ally for 60% of her own attack rating. 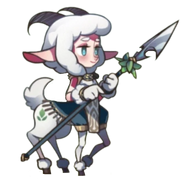 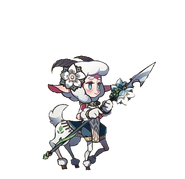 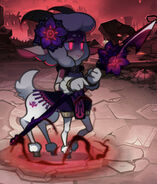 Demonic Entity from the 2019 Phantom of Horror's Eve Event 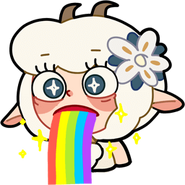 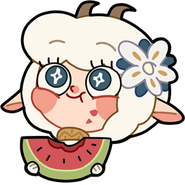 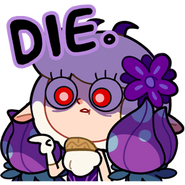